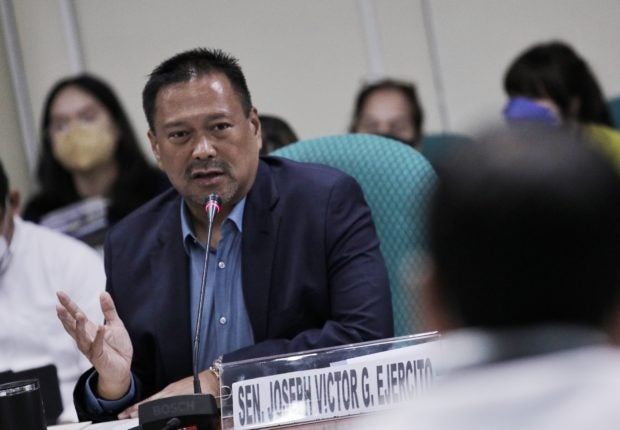 MANILA, Philippines — Senator JV Ejercito is pushing to enhance Intramuros in the city of Manila, noting that it is the “last remaining giant artifact in our history.”

During the Senate finance subcommittee hearing on Thursday, Ejercito sought for the relocation of informal settlers in the Walled City to make it a walkable tourism area.

“I think that we can do something about talagang (really) if we really focus and prioritize Intramuros because that’s our last remaining giant artifact in our history,” he said.

According to Edgardo Baysic, officer-in-charge of the Intramuros Administration (IA), construction of houses for the informal settlers is underway. The relocation area is in Morong, Rizal.

There are about 1,000 informal settler families in Intramuros, noted Baysic.

“We have a relocation site already and we’re building the homes for them in Morong, Rizal and by the first quarter of next year, we will be able to relocate the informal settlers,” Baysic said.

Ejercito, however, pointed out that the relocation area is far from Manila and may compromise the jobs of the informal settlers.

He urged the IA to coordinate with the local government of Manila and the National Housing Authority to work on the relocation site.

While the senator stressed the challenges Intramuros face, he believes that it could be just like any beautiful European nation.

“Intramuros, we can make that just like any beautiful European country. Ang ganda nu’n kaya lang (It is beautiful but) with its present state, we have a lot of things to do.

“It would really be a challenge pero sana pagtulungan natin (but I hope we could work on it together so) that we can make it really a walkable tourism area,” Ejercito said.