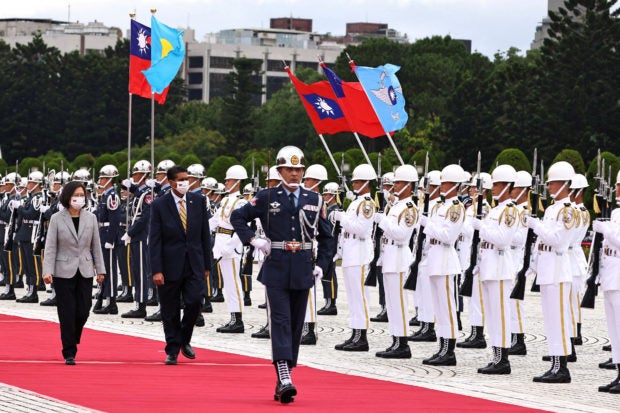 TAIPEI — The president of Palau said Thursday that his small Pacific island nation is committed to supporting Taiwan despite “mounting aggressions,” offering his strong backing at a time Beijing is ramping up pressure against Taipei in the region.

The Pacific is the site of a diplomatic tug-of-war between Beijing and Washington, and in 2019 China snatched away two of Taiwan’s then-allies there, Kiribati and the Solomon Islands.

Palau, which has a population of fewer than 20,000 people and is a close U.S. ally, is one of only 14 countries to maintain formal diplomatic ties with Chinese-claimed Taiwan.

Speaking at a welcome ceremony on a visit to Taipei, Palau President Surangel Whipps Jr. praised relations which he said were based on a shared commitment to freedom and democracy.

“The people of Palau deeply value the friendship between our two nations and are committed to supporting Taiwan despite the mounting aggressions in our region,” Whipps said, standing next to Taiwan President Tsai Ing-wen.

READ: Taiwan says it will not rely on others for defense

Whipps condemned Russia for its invasion of Ukraine, which Moscow calls a “special military operation” to disarm the country.

“In face of attempts by nations to change the international status quo by force, we must continue to work together and encourage international cooperation in order to ease military tensions,” he added.

Taiwan has faced increased military pressure from China, especially since Beijing staged war games near the island in August after a visit to Taipei by U.S. House Speaker Nancy Pelosi.

Tsai told Whipps that he was a good friend.

In the Pacific, Nauru, Tuvalu and the Marshall Islands have, like Palau, stuck with Taipei.

READ: US defense chief vows to help Taiwan defend itself

China says Taiwan is one of its provinces with no right to state-to-state ties, which the democratically-elected government in Taipei strongly refutes.