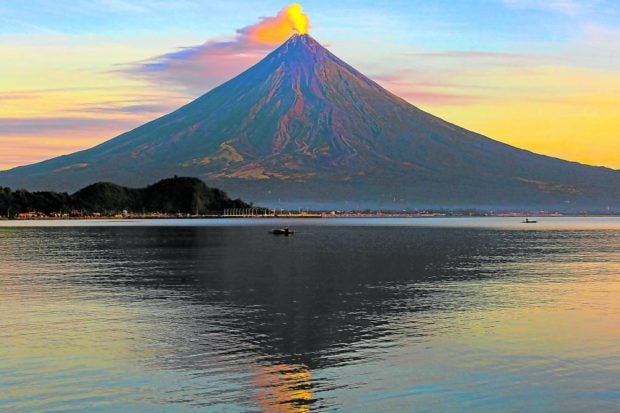 Mt. Mayon is a picture of beauty and calm at daybreak in this file photo taken from Barangay Puro, Legazpi City. (MARK ALVIC ESPLANA)

MANILA, Philippines — A faint crater glow was observed at the summit of Mayon Volcano via telescope, the Philippine Institute of Volcanology and Seismology (Phivolcs) said on Wednesday.

In its bulletin, Phivolcs said Mayon has produced one volcanic earthquake in the last 24-hour observation period. Plumes were also seen drifting west-northwest and westward.

Mayon has released 391 tons of sulfur dioxide on Oct. 1 and its edifice is slightly inflated. Phivolcs reiterated that Mayon is currently under alert level 1, or in an “abnormal condition.”

The agency warned the public of of Mayon’s perennial steam eruptions, landslides or avalanches and lahar flows during heavy and prolonged rainfall.

The public is thus barred from entering the 6-kilometer radius permanent danger zone of Mayon. Aircraft are also not allowed to fly close to the volcano.

No volcanic quakes, but Mayon still in abnormal condition – Phivolcs