US to require extra hour of rest for flight attendants 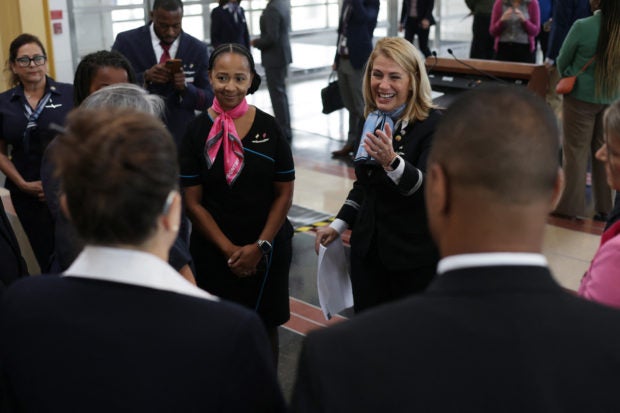 International President of the Association of Flight Attendants-CWA Sara Nelson speaks to fellow flight attendants after a press event at Ronald Reagan Washington National Airport on October 4, 2022 in Arlington, Virginia. The FAA has issued a final rule requiring flight attendants to receive 10 hours of rest between shifts. AFP

NEW YORK — US authorities will require flight attendants be given an additional hour to rest between trips, according to new rule announced Tuesday.

The Federal Aviation Administration will lift the minimum rest time to 10 consecutive hours from nine, implementing a rule change as required by a 2018 law.

“Flight attendants, like all essential transportation workers, work hard every day to keep the traveling public safe, and we owe them our full support,” US Transportation Secretary Pete Buttigieg said.

“This new rule will make it easier for flight attendants to do their jobs, which in turn will keep all of us safe in the air.”

The Association of Flight Attendants, which had long fought for the longer rest times, praised the FAA announcement, which takes effect in 30 days and gives airlines 90 days to be implemented.

“As aviation’s first responders and last line of defense, it is critical that we are well rested and ready to perform our duties,” said AFA President Sara Nelson

“Covid has only exacerbated the safety gap with long duty days, short nights, and combative conditions on planes.”

Nelson praised President Joe Biden for enacting the measure, adding that while the 2018 congressional mandate “could not have been more clear,” officials in Donald Trump’s administration “put our rest on a regulatory road to kill it.”

Of course there’s a Filipina purser on board