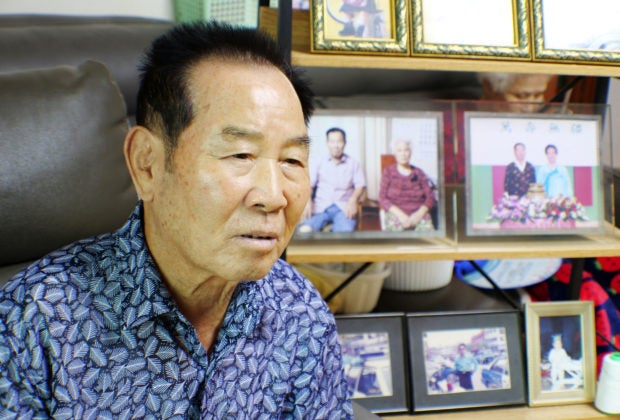 Hwang Rae-hwa, 80, who hasn’t been able to meet his family members in North Korea since Korean war, speaks during an interview with Reuters at his home on Ganghwa island just south of the demilitarized zone separating the two Koreas, in Incheon, South Korea, September 13, 2022. REUTERS

SEOUL — Hwang Rae-ha is 80 years old and despairs of ever seeing his mother again after the Korean war separated them in the 1950s.

“I want to see her one last time, but she doesn’t even come to my dreams,” said Hwang, a South Korean who fears she has died of old age after the war stranded her in the North along with his two sisters.

For families separated after the Korean war halted in a truce rather than a peace treaty, the only chance to reunite with loved ones can come through a lucky draw to participate in rare government-sponsored reunions.

Or by hiring brokers to arrange a secret meeting in China, but that is too costly for most.

Now COVID-19 border curbs make those prospects even less likely, and combined with strained ties between the neighbors, could put paid to the hopes of hundreds of thousands of Koreans in the twilight of their lives.

“It is all a joke. North Koreans don’t like to talk,” said Hwang, whose mother would be older than 100 if still alive, when told of a proposal the South Korean government made to the North in September for a reunion event.

These are usually a barometer of the state of ties between the two sides technically still at war. But far from responding, North Korea has not even acknowledged receiving the suggestion.

Hwang, whose border home affords him occasional hazy glimpses of his old hometown in the North, dismissed the offer made by the government of President Yoon Suk-yeol as probably a half-hearted humanitarian gesture unlikely to bear fruit.

In view of the tense relations, there is probably “zero” chance of a new reunion event, said Jang Man-soon, head of the nonprofit Korean Assembly for Reunion of Ten-million Separated Families.

“The Yoon Suk-yeol government is saying, ‘We can do anything but only if you, North Korea, give up nuclear weapons.’ But that ‘if’ is not what North Korea will accept,” Jang added.

More than four years have passed since the last reunions arranged by the governments. Twenty-one events in the 18 years since 2000 briefly brought together about 100 families from each side.

Just a third of the roughly 130,000 South Koreans who applied to participate in such reunions are still alive, and most are older than 80, government data shows.

Thousands die every year. And 80% say they do not know whether loved ones in the North are still alive, a survey in December showed.

Among those who consider themselves lucky is Shim Gu-seop, 89. Four decades after the war separated him from his mother and two siblings, he received a letter from his brother brought by a Korean American friend who visited his old Northern hometown.

“On June 21, 1967, Mother, whom you miss so much, passed away from a stroke,” read the letter, some of its characters smudged by his brother’s tears. “She woke up briefly on the third day and said her last words, ‘I miss Gu-seop.'”

Shim re-united with his brother in the Chinese city of Yanji in 1994, helped by an ethnic Korean in China who brought the sibling there from his home in the North’s eastern city of Hamhung.

Before they parted, Shim bought his brother shoes and a sewing machine and gave him the leather gloves he was wearing.

He recalled using binoculars to watch his sister “walk like a crab” on a dock across the Yalu river bordering North Korea, probably to avoid the suspicion of border guards.

After his trips to China, the South Korean unification ministry, which handles ties between the neighbors, entrusted to him a group that arranges private gatherings for separated families.

Using his clandestine network of collaborators, many of them ethnic Korean traders in China, Shim has arranged 47 reunions and exchanged hundreds of letters for separated families since the late 1990s.

But the pandemic has brought such private contacts to a halt, even for those who can afford the 10 million won ($7,000) needed to arrange them, as the border between North Korea and China has closed.

That means cash cannot be smuggled into the North to pay the brokers, said Shim and other organizers. Now Shim is campaigning to let families exchange postcards, at least.

“With the money to buy a cup of coffee, you can send postcards anywhere around the world, except South Korea and North Korea. What a tragedy for Koreans,” he said.

“The separated families’ issue will be forgotten in 10 years. It will be like nothing happened before.”

Elderly Koreans shut out of family reunions use backchannels