Elderly Koreans shut out of family reunions use backchannels 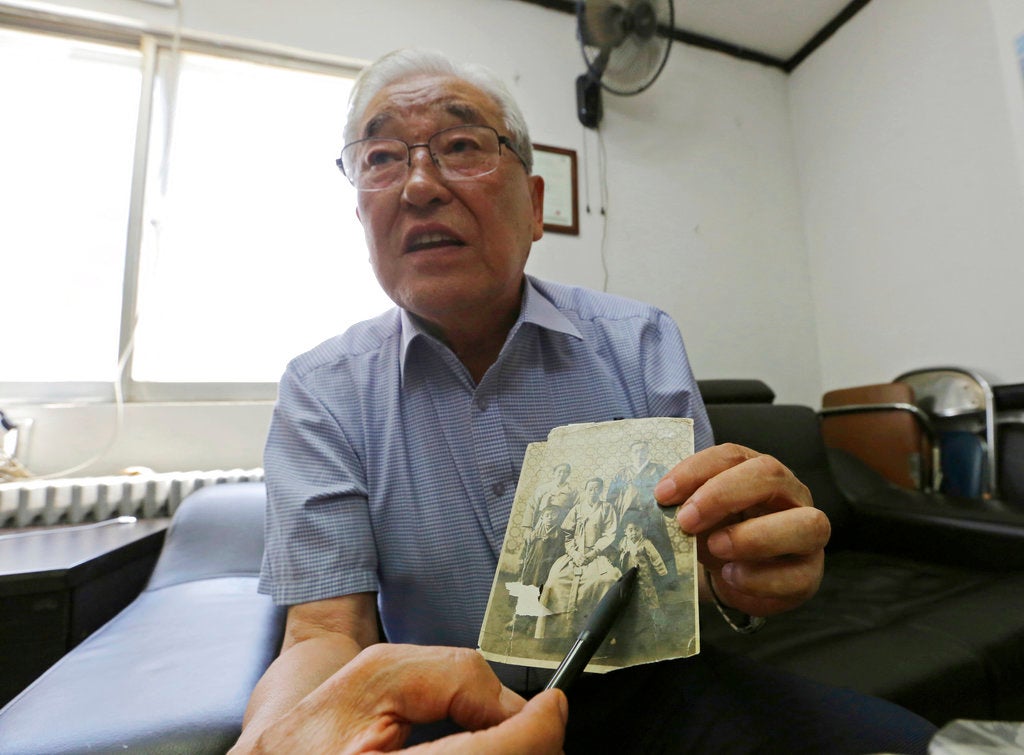 In this Aug. 22, 2018, photo, Shim Goo-seob, 83, shows a photo of his family member during an interview at his office in Seoul, South Korea. Only a fraction of the elderly Koreans separated by the Korean War are able to attend the on-and-off reunions organized by their rival governments. So some South Koreans turn to unofficial networks of brokers, friends and others to correspond with their loved ones in the North. Shim said he has arranged face-to-face reunions in China among North and South Koreans via his own network of brokers and helpers. (AP Photo/Ahn Young-joon)

SEOUL, South Korea — Kim Kyung-jae will probably never be chosen in the government lottery that would allow him to reunite one last time with his relatives in North Korea. But that’s no problem, he said this week in an interview, even as a small group of the lucky South Koreans who won the lottery met with their loved ones in North Korea.

The 86-year-old Kim is one of a dwindling number of elderly South Koreans who, frustrated with North Korea’s reluctance to allow more frequent reunions and by the small chance that they’ll be selected before they die, found unofficial networks to communicate with their North Korean relatives. For three decades Kim has been sending his North Korean sister letters and aid.

“It’s absolutely regrettable that other South Koreans don’t know about these communication channels,” Kim said, showing a bunch of letters with North Korean stamps that his sister has sent to him over the years.

During this week’s reunions, which end Sunday and are organized by the rival governments, hundreds of Koreans, many in their 70s or older, have been reunited for the first time since the 1950-53 Korean War. But they are just a tiny fraction of the separated families in the Koreas, where millions were split during the turmoil of the war. This is the 21st time the Koreas have had such reunions, but they don’t occur regularly because of long periods of bad feelings between the rivals, and Pyongyang’s reluctance to expose its people to the outside world.

So Kim and others turn to friends, brokers and others in China, Japan and elsewhere to try to find out whether their relatives in North Korea are still alive and to arrange exchanges of letters, photos, phone calls and sometimes face-to-face meetings with them.

Officially, both Koreas ban their citizens from contacting each other without government approval. But South Korea allows and even quietly helps finance backchannel contacts among separated families on humanitarian grounds. It’s likely that Seoul keeps the backchannel programs low-key because of worries about angering North Korea, which refuses South Korea’s push to have more frequent official reunions because it uses them as political leverage. South Korean officials have occasionally told separated families of their support for unofficial exchanges, but they’ve stopped short of major publicity campaigns because of concerns about brokers swindling people.

According to a Seoul government tally on civilian-arranged exchanges between separated families, there have been about 11,610 cases of letter exchanges and 1,755 face-to-face encounters involving 3,416 Koreans since 1990. By comparison, before this week’s reunions, government-sponsored programs saw 19,770 people reunited in person since 2000; none was given a second chance to reunite.

The backchannel exchanges flourished during a previous “Sunshine” era of inter-Korean detente, but the number has sharply decreased in recent years as many elderly refugees in South Korea have died and North Korea has tightened control on its once porous border with China.

Because thousands of separated family members die each year in South Korea without getting a chance to attend the on-again off-again government-organized reunions, these informal exchanges are often the only way for some to communicate with their relatives in the North.

Kim, who once ran a fisheries export business in Japan, said he has friends there who print out his emails and mail them to his younger sister and other relatives in North Korea. When they get replies from North Korea, they scan and email them to Kim.

When he wants to give his relatives clothes, shoes and other items, he uses brokers in China to send them by parcel post after paying them 200 yuan ($30) for each 20-kilogram (44 pounds) box.

Kim said his mail exchanges and aid shipments run smoothly, in part because he has never criticized North Korean leadership in his letters and his sister, now in her mid-70s, used to start her letters by praising North Korea’s ruling Kim family.

His letter exchanges began in the early 1990s when he found the address of his sister, who years earlier sent him a photo of his parents and the news of their deaths via a former neighbor who’d acquired a U.S. citizenship and visited the North. “After looking at the photo, I cried a lot, really a lot, because I had thought they were still alive,” he said.

In 2002 when Kim lived in Japan, his sister made a collect call to him and they had an hour-long conversation. She repeatedly called him “Oppa,” a term women use for their elder brothers. “I told her ‘Don’t cry; just say something,’ but she could only weep and say ‘Oppa’ again,” Kim said.

Kim now runs an organization with a fellow refugee to help others connect with their long-lost kin in North Korea. The organization receives a state subsidy.

His partner, Shim Goo-seob, 83, said he has arranged face-to-face reunions in China among North and South Koreans via his own network of brokers and helpers.

Shim said he was able to meet with his younger brother living in North Korea in the Chinese border town of Yanji in 1994 after a Chinese helper disguised himself as his brother’s uncle and invited him to visit. Shim said he spent three days with his brother in Yanji, and they stayed up all night talking about their lives on the first day.

Shim tried to get his younger sister to come to China for another brief family reunion, too, but she couldn’t get a Chinese visa so he had her come to a border river and watched her with binoculars in 2003. He said she shuffled from side to side to make herself stand out among the other people on the riverbank.

“My heart ached,” Shim said of seeing her.

Some refugees don’t know about these unofficial ways to see their relatives in the North, while others are afraid of being swindled by brokers or think they’ll be breaking South Korea’s anti-Pyongyang security law.

Cho Il Woong, 86, has repeatedly been rejected for government-organized reunions, and while he’s desperate to see his siblings in the North before dying, he worries that using a broker would get him in trouble with the South Korean government.

The son of a late South Korean woman who never remarried while waiting for her husband in the North said brokers helped him exchange letters more than 20 years ago with a North Korean man who they said was his father. But the son, Park Yong Ho, said he suspected that the brokers tried to bilk him out of money with a false promise of a face-to-face reunion, which never happened.

Even if separated families are reconnected, their relations don’t usually last long, often because South Koreans don’t want to continuously financially support their relatives in the North, according to Kim and Shim.

One of Kim’s brothers once asked him why he was helping their sister, who was completely alone when their parents died because her other siblings fled to South Korea during the war.

“I wanted to help her because it was heart-breaking to imagine how much she cried when our parents died,” Kim said. “I told my brother that I would have done the same thing for him if he’d stayed behind in the North.”  /muf