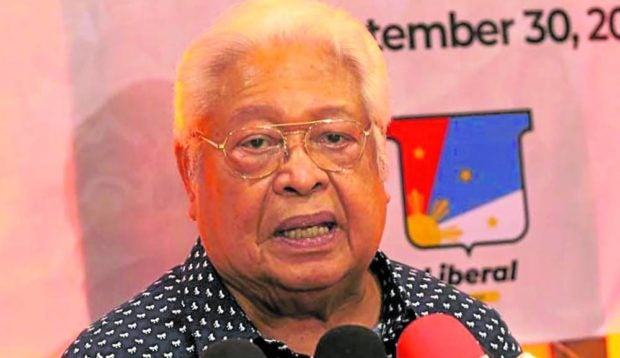 MANILA, Philippines — Albay Rep. Edcel Lagman is pushing for a purge of “unnecessary, excessive” confidential and intelligence funds in the P5.268-trillion proposed national budget for 2023, as “no stretch of the imagination or flexibility of logic” can justify the P9.29-billion funds tucked in government agencies.

The independent opposition lawmaker made the call as a four-member House panel mulls over proposed changes to House Bill No. 4488 or the 2023 General Appropriations Bill.

In a statement, he pointed out that the use of confidential and intelligence funds are “shrouded in mystery and the supposed audit by the Commission on Audit could not be disclosed to the Congress and the public.”

“These funds breed corruption, and the more enormous the funds are, the greater the magnitude is for the possibility of graft,” Lagman said.

He argued that “no stretch of the imagination or flexibility of logic” can justify the P500 million in the Office of the Vice President’s (OVP) budget, and the P150 million tucked in the Department of Education’s (DepEd) budget, which is also headed by Vice President Sara Duterte.

“The OVP is not a surveillance agency and has no jurisdiction over matters of national security. The novels of Agatha Christie and the exploits of Sherlock Holmes are not staple readings for basic education and the mandate of DepEd does not include detective activities,” Lagman said.

He made the remarks as a four-member committee is poised to convene and discuss the proposed amendments to HB 4488, which the House passed on final reading last week.

Just like previous years, the committee will collate and consolidate the proposed amendments to be submitted by congressmen who sponsored the budgets of various government agencies.

In an interview with reporters on Monday, Dalipe said the four-member panel will be convening soon to discuss the proposed changes to HB 4488. He did not give a timeline as to when the panel is likely to finish consolidating the proposed amendments.

“Maybe in a few days, we will be able to forward it already to the Senate. We’re just trying to pick which amendments [to include],” he said.

The House is on a break and will resume plenary sessions on Nov. 7. During the break, House committees may conduct hearings to deliberate measures and resolutions.

Dalipe said the four-member committee is still collating the proposed amendments from other congressmen, which includes increased funding for government agencies like the Department of Social Welfare and Development, Department of Labor and Employment and Department of Health, to name a few.

The changes will “definitely” include allocations for key programs that got zero funding in the 2023 National Expenditure Plan. Dalipe did not name which programs are sure to get funding.