Having confidential funds not a DepEd norm – Pimentel | Inquirer News 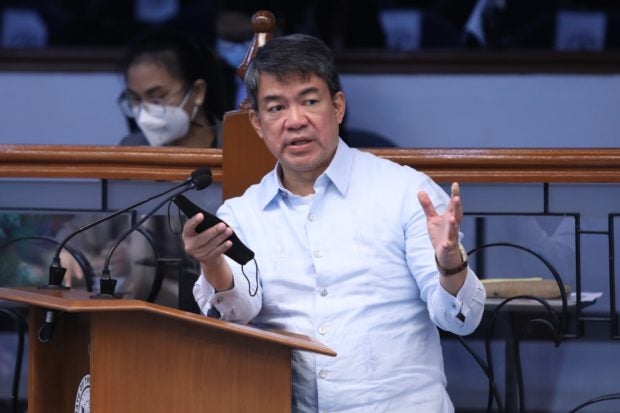 MANILA, Philippines — Opposition Sen. Aquilino Pimentel III urged his fellow senators to realign the P150 million in confidential funds allotted to the Department of Education (DepEd) for its 2023 budget, saying the money could be used to repair schools damaged by Typhoon Karding (international name: Noru) in many parts of Luzon.

In seeking the realignment, Pimentel, the minority leader, said in a radio interview on Saturday that even Vice President Sara Duterte, who is also education secretary, was leaving it to the senators to determine how much she should get for confidential expenses.

“The P150 million should be transferred because it is not in the practice or culture of DepEd to have confidential funds. This must be placed in items directly related to teaching or learning, not confidential funds and yet, they will claim that it will still be for education,” he said.

The P150 million will better serve its purpose if used to buy chairs, tables or build classrooms, Pimentel said.

The Senate minority leader made the statement a day after the Senate finance committee endorsed the P710.6-billion DepEd budget, which contains P150 million in confidential funds for the education secretary, Vice President Duterte.

Pimentel urged the national government to stop the “practice or culture” in the executive department of having confidential and intelligence funds, which are beyond scrutiny by the Commission on Audit.

“Where it stands in the NEP [National Expenditure Program], the executive is set to get about P10 billion in confidential and intelligence funds. That should be discouraged or at least reduced; we’d rather put the money in specified line items that are more needed,” he said.

Aside from the P150 million confidential funds, Pimentel said the two-member Senate minority would also question a “lump sum” amount in the DepEd budget, and would seek details about its purpose “in the spirit of budgeting transparency.”

He also said he supported funding amounting to P1 billion that DepEd said it needed to repair classrooms destroyed by Karding.

“In addition, they can augment the funding for the (special education program) that was left out in the NEP. We can put the P150-million confidential expenses there so that (Congress) will not be accused of putting money on the wrong priorities,” Pimentel said.

At the House of Representatives earlier in the week, opposition Rep. Edcel Lagman of Albay expressed the same sentiments expressed by Pimentel regarding the allocation of confidential and intelligence funds in the P5.268-trillion 2023 national budget.

He urged fellow House members to be “very judicious and frugal” in allocating such funds, which amounted to about P9.27 billion in the proposed budget, and should find ways to finance important government programs that received only small amounts or zero allotments for 2023.

Lagman pointed to the P4.5-billion confidential and intelligence fund that is nearly half of the proposed P9.03-billion budget for the Office of the President (OP).

The proposed budget for the Office of the Vice President amounting to P2.29 billion included P500 million in confidential funds, a huge increase from less than P10 million in previous years, according to documents from Lagman’s office.

Kabataan Rep. Raoul Danniel Manuel called for the realignment of the OP’s confidential and intelligence funds to “much-needed social services,” especially for education.

He said that the P4.5-billion allotment for the OP could be used to fund the salary increase of 460,000 teachers or 368,000 nonteaching personnel.

The same amount could be used to repair and rehabilitate 6,800 classrooms or provide 31,200 school seats or hire 9,300 nurses for the schools or provide 700,000 classrooms with improved ventilation based on the latest COVID-19 protocols.

That money could also provide education assistance to an additional 1.6 million beneficiaries of the social welfare department or give P10,000 each to 440,000 recipients of student aid or 74,000 beneficiaries of the Commission on Higher Education’s tertiary education subsidy or 294,000 Tulong Dunong scholars, Manuel said.