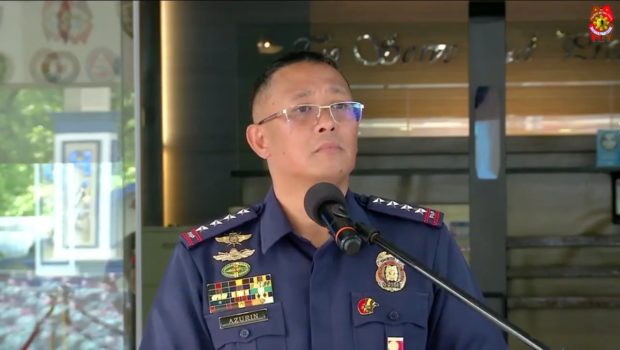 During a news conference on Monday, Azurin emphasized the need to efficiently enforce the government’s controversial “drug war,” adding that the PNP is now tweaking its anti-drug campaign strategy.

“We really need to restudy iyong (the) supply reduction, as well as iyong (the) demand reduction. We wanted to copy iyong strategy natin sa (our strategy in the) NTF-Elcac. It will be a holistic approach where every agency na kailangan ma-involve dito sa war on drugs natin (that needs to be involved in this war on drugs) will be present, na kailangan sumali sila (that they should take part),” he further explained.

Also mentioned during the top cop’s recent meeting with the United States Indo-Pacific Command in Hawaii was the transnational approach to stamping out crime, especially offenses related to illegal drugs.

(One of the issues that we talked about in Hawaii is the need to beef up our border security, our control so that we can lessen or stop the entry of illegal contraband here, specifically illegal drugs entering our country.)

Azurin has previously expressed intent to continue the drug war in the country “regardless of who gets hurt and who gets caught.”

He said the PNP would recalibrate and employ “a more sustainable concept of operations” in dealing with crimes, especially on the country’s war on drugs among others. With reports from Kristelle Anne Razon, trainee