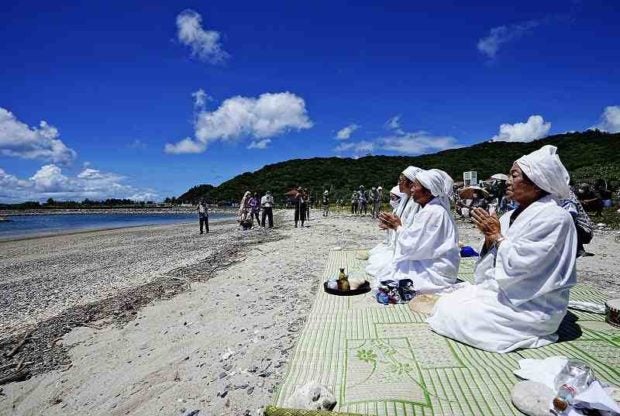 “Kaminchu” priests pray at a beach during an Ungami ritual at Shioya Bay in Ogimi, Okinawa Prefecture, on Aug. 14. The Japan News/Asia News Network

OGIMI, Okinawa — Okinawa’s traditional rituals have been handed down since the days of the Ryukyu Kingdom (1429-1879), but many customs have recently disappeared or been transformed due to changing lifestyles and depopulation.

In the village of Ogimi in northern Okinawa Island, a ritual called Ungami took place on Aug. 14. Four female priests, known as “kaminchu,” sat on the beach under a clear sky and recited prayers to the sea as islanders silently watched with their heads bowed and hands pressed together.

Ungami is a festival to welcome the sea deity and pray for a good harvest and catches in addition to the well-being of the people. It is based on the uniquely Okinawan belief that the deity lives in a place called Niraikanai, far out to sea.

Similar festivals take place mainly in the northern part of Okinawa Island, but the Ungami of Shioya Bay in this village has been designated as a national important folk cultural asset because it preserves the form of the ancient beliefs. Related events such as rowboat races and sumo matches were canceled due to the coronavirus pandemic, but the ritual itself continues to be performed.

“Ungami has united and strengthened our community for generations,” said Akira Chinen, head of the Shioya district. “We feel connected to the deity, our ancestors and our history. We can’t let it die out.”

Across Okinawa, there were sanctuaries called “utaki” — sometimes a forest and sometimes a place with naturally created stone formations — where women known as “kaminchu” have been in charge of rituals. Even in modern times, the rituals have continued to be performed by women who have been chosen by hereditary succession or by lot.

“At the core of Okinawan culture is the belief that sisters spiritually protect their brothers,” said Masanobu Akamine, professor emeritus at the University of the Ryukyus.

However, after World War II, lifestyles changed due to the U.S. occupation. Furthermore, after control of Okinawa was returned to Japan in 1972, the kaminchu organizations and rituals gradually dwindled due to the concentration of the population in urban areas.

Kudaka Island off the coast of the southern part of Okinawa Island was considered one of the most sacred sites in the kingdom, and the inauguration of a woman to preside over the ritual has been held once every 12 years. However, due to the lack of a successor, the ritual, called “izaiho,” has not been held since 1978.

A person on Miyako Island representing a Paantu deity approaches a young girl to apply mud to her to ward off bad luck.
A festival involving Paantu, masked and mud-covered deities that visit Miyako Island’s inhabitants, was registered as a UNESCO Intangible Cultural Heritage in 2018, but the event is struggling to secure participants. The islanders have managed to maintain the festival by raising the maximum age for those who can join the local youth association, which is responsible for the event, by a decade to 40 years old.

Many of Okinawa’s rituals are derived from rice harvest celebrations and prayers for a good harvest.

However, after the war, in addition to a decrease in the farming population, rice paddies have almost completely disappeared as the main crops have been replaced by sugarcane and pineapples.

One factor that has made the continuance of the rituals difficult is a shift in the source of people’s income. For example, in many parts of Okinawa, a traditional tug-of-war event has long been held as a ritual to celebrate a good harvest, but most of the straw used for the ropes is now procured from outside the region.

Shioya Bay’s Ungami is also facing a similar existential crisis as Ogimi Village, which had about 9,200 inhabitants in 1950, now has a population of 3,000.

“As values have become more diverse with modernization, it’s becoming more difficult for people to share the sense of awe and respect for deities in nature,” the University of the Ryukyus’ Akamine said. “Amid these circumstances, people are seeking ways to continue traditional rituals.”