DOJ blocks own witness who has cleared De Lima 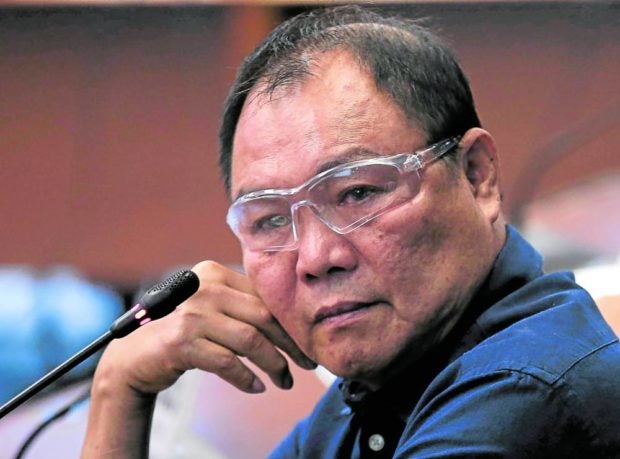 MANILA, Philippines — A government witness who in April recanted his statements linking former Sen. Leila de Lima to drug trafficking appeared in court on Friday but was prevented by prosecution lawyers from affirming his retraction on the witness stand.

Five months since signing his recantation and announcing it to the media, former Bureau of Corrections (BuCor) officer in charge Rafael Ragos appeared at the Muntinlupa City Regional Trial Court (RTC) supposedly to affirm his April 30 affidavit.

In his retraction, Ragos said he was just coerced by then Justice Secretary Vitaliano Aguirre II and his subordinates into testifying that De Lima received payoffs from convicted drug lords at New Bilibid Prison (NBP).

Accompanied by his lawyer, Michael de Castro, Ragos spent only an hour in the sala of Muntinlupa RTC Branch 204 Judge Abraham Joseph Alcantara, who is hearing one of the two remaining drug cases against De Lima.

Detained since 2017, the former senator, human rights commission chair and justice secretary has denied the charges, dismissing them as mere political vendetta for her criticism of then President Rodrigo Duterte’s bloody antidrug campaign and his human rights record as Davao City mayor.

The trial is closed to the media. Speaking to reporters after Friday’s hearing, De Castro said the Department of Justice (DOJ) filed on Thursday a motion for reconsideration (MR) on an earlier court order that would have allowed Ragos to take the stand.

The court gave the defense lawyers five days to comment on the prosecution’s MR. The next two hearings on De Lima’s Criminal Case No. 17-165 were set for Oct. 28 and Nov. 4.

In their six-page MR, the DOJ panel led by Provincial Prosecutor Ramoncito Bienvenido Ocampo Jr. argued that “recantations are typically viewed with suspicion and hardly given much weight.”

They said Ragos’ court testimonies on June 7, 14, and 28, 2019, were consistently repeated when he appeared in Congressional hearings, like when the Senate tackled the issue of good conduct time allowance for prisoners entitled to early liberty in September 2019.

Calling back Ragos to the stand would be “procedurally erroneous” and “will only make a mockery of justice under the circumstances considering that he is a perjured witness and recantations are untrustworthy and frowned upon in our jurisdiction.”

The subject of the prosecution’s MR was Alcantara’s order that granted the motion of co-accused Ronnie Dayan, De Lima’s former aide, to let Ragos testify again. Like De Lima, Dayan was also cleared by Ragos in his April 30 affidavit.

Fearing for his safety

De Castro said his client’s “primary concern is his safety. He is afraid.”

“We were ready to come out with the truth, but in the end, it has been delayed,” he added.

Also on Friday, Ragos’ lawyer filed a motion seeking to expunge from court records three affidavits that the former BuCor official submitted—on Sept. 5 and Sept. 26, 2016, and in March 2017—to build the cases against De Lima, saying these documents were executed under duress and not in the presence of an attorney of his choice.

“By filing a motion to suppress and expunge the previous affidavits, I think he (Ragos) doesn’t need to affirm this because, as per our Constitution, confessions signed without an independent and competent lawyer assisting you can be stricken off. His recantation is just like an additional detail,” De Castro told reporters.

De Lima was also present in Friday’s hearing. “We just have to respect the processes of the court. We are confident that [Ragos] will be able to testify,” she told reporters while being escorted out of the court and back to detention cell at Camp Crame.

Her counsel, Boni Tacardon, said they were hoping that Ragos’ affirmation of his recantation would be a big blow to the government’s case against her.

“In his affidavit of recantation, [Ragos] said he was telling the truth and that his previous affidavits were all lies. So if the [recantations] will be admitted, it will have an impact on our case,” he said.

As the BuCor chief at the time, Ragos was originally a co-respondent of De Lima and Dayan but was dropped from the case in November 2017 after the DOJ made him a state witness.

In three court hearings in June 2019, Ragos testified that he personally delivered money from NBP inmates to De Lima’s house in Parañaque City when she was still justice secretary under the Benigno Aquino III presidency. The cash deliveries made on Nov. 24 and Dec. 15, 2012—at P5 million each—were supposedly to fund her 2016 senatorial bid.

Ragos also claimed he had a transaction with Dayan arranging the two deliveries.

It was one of the testimonies cited by the court when it denied De Lima’s plea to post bail and her demurrer to evidence filed in February 2021.

Also at Friday’s hearing, a son of Dayan testified that his father did not receive money from Ragos on the dates mentioned on the now-recanted testimonies.

According to Tacardon, Dayan’s son said his father was at their Pangasinan residence in November and December 2012 for a family celebration. INQ

Read Next
NATO says Putin’s ‘serious escalation’ will not deter it from supporting Ukraine
EDITORS' PICK
Lawmakers eyeing more changes in Maharlika plan
How not to retire as an ex-president
Hidilyn Diaz wins only gold missing from her collection
Shop smarter with vivo’s big 12.12 holiday deals
The vivo Y02 is now available in the Philippines for only PHP 5,299
House energy committee chair Arroyo bats for cheap electricity
MOST READ
Don't miss out on the latest news and information.