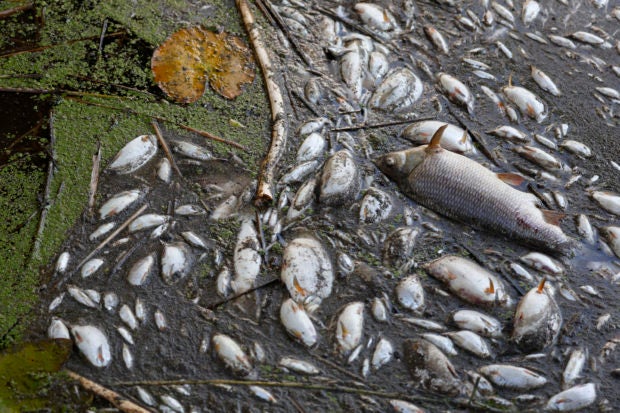 In this file photo taken on August 12, 2022m dead fish are pictured on the banks of the river Oder in Schwedt, eastern Germany, on August 12, 2022, after a massive fish kill was discovered in the river in the eastern federal state of Brandenburg, close to the border with Poland. – Polish authorities on September 29, 2022 said toxic algae was to blame for mass fish deaths in the Oder river, ruling out industrial pollution as the cause. (Photo by Odd ANDERSEN / AFP)

BERLIN — Germany said Friday that mass fish deaths in the Oder river were a “man-made environmental disaster,” blaming toxic algae growth sparked by the introduction of salt into the waters.

Presenting a report into the disaster that saw at least 300 tonnes of dead fish pulled from the river in Germany and Poland this summer, the German environment ministry said the most likely cause was “a sudden increase in salinity.”

The “introduced salt” led to a “massive proliferation of a brackish water algae that is toxic to fish”, it said.

However, “due to a lack of available information, the experts had to leave open what caused the unnaturally high salt content,” it added.

German Environment Minister Steffi Lemke said it was clear that “human activity” was to blame.

Tons of dead fish have been hauled out of the River Oder, which flows along part of Poland's border with Germany, and officials warned people not to enter the water while the Polish government pledged to investigate possible contamination. | via Reuters

Polish authorities had on Thursday released a separate report that also blamed toxic algae for the fish deaths.

But the Polish report said the disaster had most likely been caused by poor water quality as a result of high temperatures and very low water levels over the summer.

Poland and Germany have long been at odds over the disaster.

Berlin initially accused Warsaw of failing to communicate the problem, while Poland slammed Germany for spreading “fake news” about the discovery of herbicides and pesticides in the water.

Fear for future after fish mass die-off in Poland

As thousands of dead fish neared the banks of the Oder River in the village of Widuchowa in western Poland on August 11, local people realized an ecological disaster that started in late July in the country's south-west was heading towards the Baltic Sea. | 🎥 : Reuters

A report in Germany’s Der Spiegel magazine on Friday accused Polish authorities of failing to cooperate with their German counterparts to investigate the fish deaths.

Polish authorities became “more and more reserved, in some cases almost secretive,” Lilian Busse, the head of the investigation, was cited as saying.

The Spiegel report said Greenpeace investigations had shown high salt levels at a copper mine in the city of Glogow may have contributed to the disaster.

“It is obvious to me that the Polish government wants to cover up the causes of the fish kill in the Oder,” Ralph Lenkert, environmental policy spokesman for the far-left Die Linke party, told the magazine.