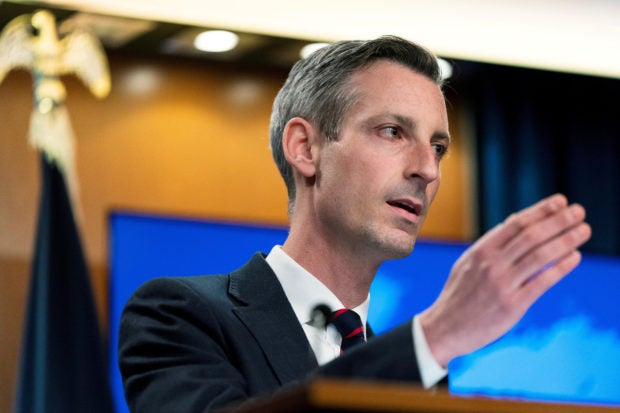 WASHINGTON — The United States will in coming days impose economic costs on Moscow over “sham” referendums held by Russia in occupied regions of Ukraine, the State Department said on Wednesday, as Biden administration officials look to the finance and energy sectors for future sanctions action.

“We will continue to work with allies and partners to bring even more pressure on Russia and the individuals and entities that are helping support its attempted land grab,” State Department spokesperson Ned Price told reporters.

“You can expect additional measures from us in the coming days.”

White House spokesperson Karine Jean-Pierre said the measures would include penalties on individuals and entities both inside and outside of Russia that support the annexation.

Moscow was poised on Wednesday to annex a swath of Ukraine, releasing what it called vote tallies showing support in four partially occupied provinces to join Russia, after what Kyiv and the West denounced as illegal sham referendums held at gunpoint.

Russian-backed authorities claim to have carried out the referendums over five days on territory that makes up around 15% of Ukraine.

Jean-Pierre said the United States will not recognize Russian-annexed areas across Ukraine.

“Based on our information, every aspect of this referenda process was pre-staged and orchestrated by the Kremlin,” she said.

President Vladimir Putin could proclaim the annexation in a speech within days, just over a week since he endorsed the referendums, ordered a military mobilization at home and threatened to defend Russia with nuclear weapons if necessary.

“There will be more packages. We are working on more sanctions,” O’Brien told the committee.

“Everything is on the table,” he said.

The United States has imposed several tranches of sanctions targeting Moscow following Russia’s invasion of Ukraine in February, which has reduced cities to rubble and killed or wounded thousands.

Washington and its G7 partners have said they will put a price cap on Russian oil in place, but have held back from directly targeting major Russian energy companies over concerns about energy prices and supply.

“The largest source of hard currency that Russia has now is from energy sales,” Rosenberg said.

“It’s in energy where we must focus our attention in order to deny Russia that revenue.”

O’Brien warned that it was time for India, which has been buying large amounts of Russian oil, more than it did before the Feb. 24 invasion, to reconsider where it is positioning itself geopolitically.

While India’s purchases have been at discounts, the heavy volumes have been helping Moscow’s economy. The United States and other G7 countries hope India will join a plan to place a price cap on Russian oil by December to further decrease Moscow’s revenues from oil exports, which help fund its war machine.

O’Brien also said Washington will continue working with China to ensure it understands U.S. sanctions and the effect they have on China’s engagement with Russia.

As Western nations have shunned Russia, Moscow has put emphasis on cooperation with China. The two nations have increased their trade and Russian companies have started issuing debt in yuan.