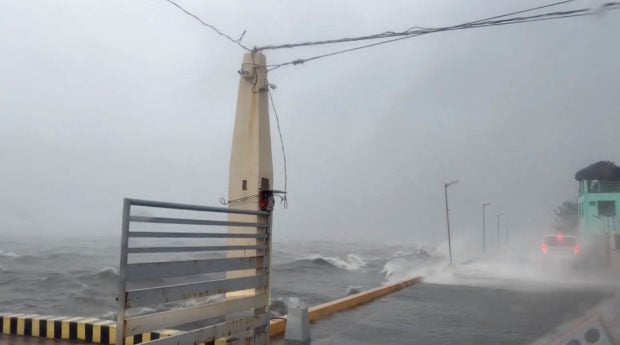 Waves crash into road on coastline during heavy storm in Polillo, Quezon province September 25 in this still image obtained from a video. Lgu Polillo Handout/via REUTERS

LUCENA CITY — A naked woman’s body was found floating Tuesday in the Pacific Ocean off Polillo island in Quezon province.

A fish warden spotted the floating body in the sea off the coast of Barangay Sabang around 7:30 a.m., the Quezon police reported on Wednesday, Sept. 28.

The unidentified woman was was wearing only a round silver earring.

The police are probing further to identify the woman and the cause of her death or if she died during the onslaught of super typhoon Karding (international name: Noru) on Sept 25.

The police said the old man, allegedly drunk, possibly slipped while walking home and died on the spot.

Investigators ruled out foul play in his death.