Rain over Palawan, Zambales, Bataan due to southwest monsoon – Pagasa 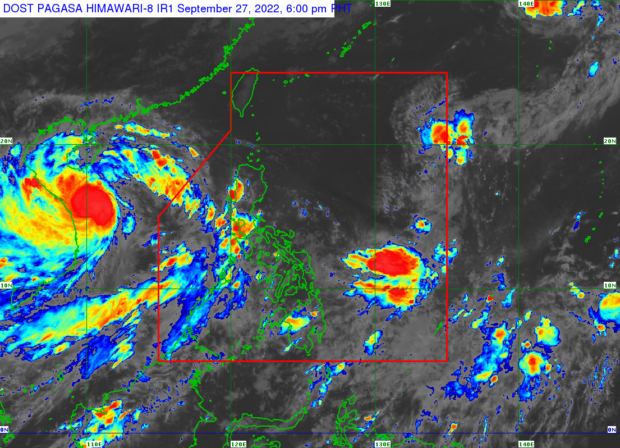 The state weather bureau says overcast skies with rain may be experienced in Palawan, Zambales, and Bataan on Wednesday, September 28, 2022, due to southwest monsoon, locally termed “habagat.” – This photo shows the weather satellite image from the website of Pagasa.

MANILA, Philippines — Rain is highly possible in Palawan, Zambales, and Bataan due to the southwest monsoon, locally known as “habagat,” on Wednesday, the Philippine Atmospheric, Geophysical and Astronomical Services Administration (Pagasa) said.

(Here in Luzon, due to the continued prevalence of the southwest monsoon, expect cloudy skies with rain in parts of Palawan, including the Kalayaan Islands, and Zambales and Bataan areas.)

(For the rest of Luzon, generally fair weather conditions will be experienced with chances of rain brought about by localized thunderstorms in the afternoon until the evening.)

The Pagasa weather specialist also said that cloudy skies will prevail over Western Visayas likewise due to the effects of the southwest monsoon, while the rest of Visayas and the entire Mindanao region will have relatively fairer weather with chances of rain due to thunderstorms.

Meanwhile, Pagasa noted that it is monitoring a low pressure area (LPA) outside the Philippine area of responsibility or 1,385 kilometers east of Northern Luzon. The LPA, it said, has no direct effect on the country but it is anticipated to strengthen into a tropical depression and enter PAR in the next 24 to 48 hours.

Further, the state weather bureau said no gale warning is raised for now over the country’s surrounding coasts and in-land seas, but moderate to rough seas are seen over the seaboards of Northern and Western Luzon.

Pagasa also released its forecast temperature range in key cities/areas across the country for Wednesday, as follows: