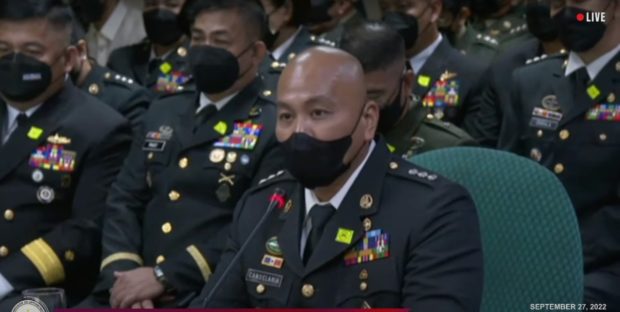 MANILA, Philippines — The appointment of military Col. Caesar Candelaria of the Medical Corps on Tuesday hurdled the Commission on Appointments (CA) committee on national defense even as his alleged involvement in the fatal hazing of Cadet 4th Class Darwin Dormitorio resurfaced during the hearing.

During deliberations on the appointment of 63 generals and senior officers from the Armed Forces of the Philippines (AFP), Senator Risa Hontiveros grilled Candelaria for his “pending criminal case for reckless imprudence resulting in homicide about the case of hazing victim Darwin Dormitorio Jr.”

“The appointee was impleaded in his capacity as then commanding officer of the Philippine Military Academy Station Hospital, and for dismissing the visible yet severe physical condition of Dormitorio,” the senator said.

Candelaria explained that “it is not [their] task to know if the patient sustained the injuries from hazing or otherwise.”

“You should be aware that patients in and out of our clinics sustained other injuries from physical activities like exercise. And as doctors, we’re limited only to what our patients tell us from the history taking,” he also said.

Asked how AFP officers are held accountable if found responsible for “dismissing or diminishing factual circumstances behind the incident of [the] victim,” Candelaria said he was unaware of the exact liabilities.

“However, I personally have my regrets. The late cadet Dormitorio was our patient several times, and it is to our regret that in his demise, probably the multiple injuries he sustained were too much. However, the hospital, on our part, did our job, and due to the ongoing investigation right now, it points out that the doctors have done their best in managing the patient,” he added.

A motion to recommend the appointment of all the AFP generals and senior officers was seconded by Hontiveros, except for that of Candelaria’s.

And after the committee meeting was briefly suspended, Hontiveros explained that she was “considering further converting that into a motion to defer that one appointment.”

“But out of consideration to the appeal of the [committee chair Rep. Jurdin Romualdo], I will simply leave my non-seconding of his confirmation on the record as a clear and strong sign to the Dormitorio family who is still pursuing justice for their son, and also as a clear signal and desire that such a death may never happen again,” she then said.

“As practiced in the CA since 1987, and I was also the congressman, when there’s a case, everybody is presumed innocent. Anyway, if they’re convicted, even if they’re no longer in the service, the judgment will still be given to you. In the meantime, you do your job,” the congressman said in a mix of English and Filipino.

The appointment of 63 generals and senior officers, which include Candelaria, will now be recommended to the CA plenary for final confirmation. With reports from Catherine Dabu, trainee