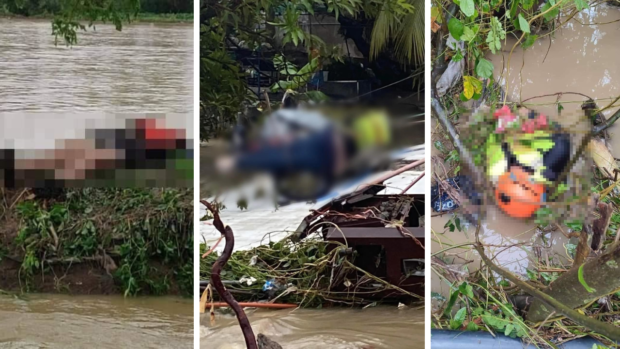 Some of the rescuers from the Bulacan PDRRMO who perished at the height of Typhoon Karding. Photos courtesy of Mdrrmo Guiguinto

UPDATED MANILA, Philippines — Several resolutions were filed in the Senate  on Tuesday commending and honoring  the heroism of the five rescuers who perished while responding to flood-hit villages in San Miguel, Bulacan at the height of Typhoon Karding (international name: Noru).

“The heroism and bravery shown by these five men, who sacrificed their lives to save their people, is an exemplary act worthy of praise and emulation and more importantly, an embodiment of dedication, courage, devotion to duty and commitment to public service,” Padilla said in his resolution.

“Now, therefore, be it resolved by the Senate, as it is hereby resolved, to express profound condolences to the bereaved families of and to posthumously accord highest commendation to Narciso Calayag, Jerson Resurreccion, Marvy Bartolome, George Agustin and Troy Justin Agustin who perished while performing their heroic and solemn duties in the rescue operations at the height of Super Typhoon Karding,” he added.

Lapid, meanwhile, said the courage, bravery, humanitarian spirit and selflessness of the five “should be held in the highest regard, paying the ultimate sacrifice in the name of duty.”

“Together with the other members of our rescue forces who have perished or survived, but who all risk their lives to save their fellow men deserve all the accolades the Filipino nation can offer,” he said in his resolution.

“Their heroism embodies their love of country and love of their people, and their noble expression of valor and gallantry serve as an inspiration to their comrades not only in the field of rescue, but also in the field of service to the people,” the senator also said.

According to Lapid, the ultimate sacrifice of the five rescuers merits the admiration, respect and gratitude not only of the persons they have saved but of the entire country as well.

“The five rescuers from Bulacan acted with incredible bravery and self sacrifice and went above and  beyond the call of duty to save the lives of others at the cost of their  own,” he said.

“They were veteran rescuers who have also helped other local governments throughout the country in previous calamities and disasters,” Villanueva  said.

For his part, Revilla lodged Senate Resolution 233 “to  recognize and honor the relentless  spirit and heroism” of the five rescuers.