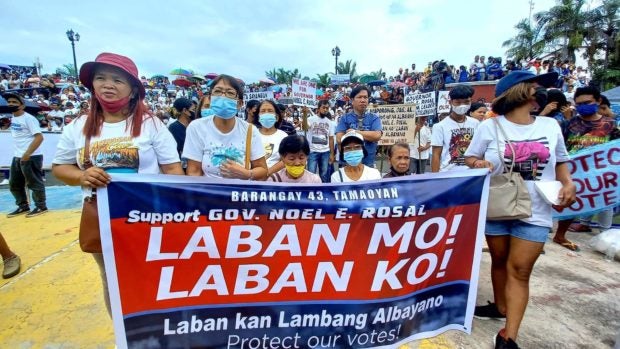 Some 10,000 Albay folks walk to Peñaranda Park with banners on Monday, Sept. 26, to show their support to Gov. Noel Rosal who is facing a disqualification ruling from the Commission on Elections for alleged violation of the Omnibus Election Code. PHOTO BY MICHAEL B. JAUCIAN

LEGAZPI CITY — About 10,000 people from the three districts of Albay trooped to Peñaranda Park in this city for a prayer rally on Monday to support Governor Noel Rosal, who is fighting a disqualification ruling by the Commission on Elections (Comelec).

Armed with streamers and placards bearing slogans, most of them in the dialect, like “we love you, Governor Noel Rosal,” “don’t waste our votes,” “Rosal a true leader, honest and helpful,” the participants expressed their support for Rosal at the prayer rally around 2 p.m.

Rosal, who won by a landslide with 469,481 votes against former Albay Gov. Al Francis Bichara, is facing a disqualification ruling by Comelec’s first division for violating the Omnibus Election Code, particularly the ban on public spending during the 2022 election period.

The Comelec ruling stemmed from a petition filed in April by defeated Legazpi City council candidate Joseph Armogila, who sought Rosal’s disqualification for approving, as the then mayor of Legazpi, a cash aid for tricycle drivers and senior citizens between March and April.

Fr. Paulo Barandon, parish priest of St. Stephen Promartyr, who joined the rally, said Rosal should remain governor because he saw a brighter future for his constituents under his term.

“Good things must continue, and change has started in Albay. Rosal is a concrete role model for young politicians,” Barandon said.

“I am here to show my support for the governor. A leader like Rosal should not be ejected,” said Nelson Castaño, 51, who made the two-hour journey from Manito town to Legazpi to join the rally.

Salve del Agua, 49, of Tamaoyan village likewise expressed her support, saying her vote, along with those of thousands of Albay voters, must be respected.