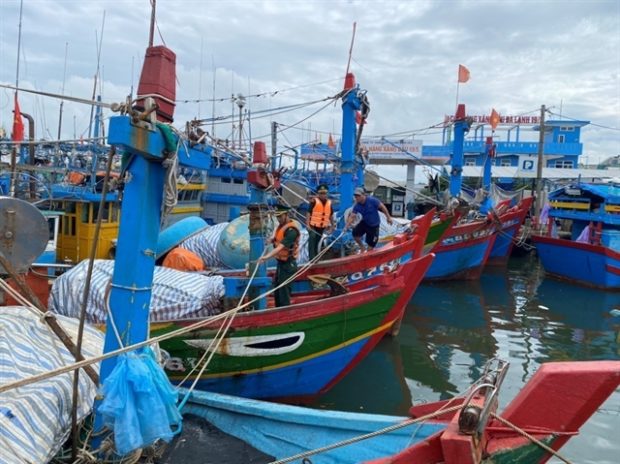 Along with other central localities, Quảng Ngãi Province’s authorities are calling fishing vessels to return to shore as the super typhoon Noru is heading towards Việt Nam with expected landfall on Wednesday. Local border guards are helping fishermen secure their boats. Viet Nam News/Asia News Network

HANOI — Vietnam’s northern and central provinces have been told to prepare for super typhoon Noru, which is heading in a northwest direction with wind speeds of up to 183km per hour.

The typhoon is set to become the fourth to hit the country in 2022.

The typhoon hit Luzon Island in the Philippines on Sunday, with wind speeds of 167-183km per hour, according to the National Centre for Hydro-Meteorological Forecasting.

All vessels working in the danger zone are at high risk of strong winds, high waves and tornadoes. The disaster risk level is at level three (five is the highest).

By 10am on Tuesday, the typhoon will be about 140km off the Hoàng Sa (Paracel) Islands and its wind speed is forecast to be 134-140km per hour.

Parts of the South China Sea are already seeing the effects, with strong gusts and waves of between six to eight metres in height.

​​Thừa Thiên-Huế Province, home to more than 2,000 fishing ships with about 11,350 fishermen, on Sunday morning banned all vessels from going to sea. The provincial port authorities are working to ensure safety for ships anchored in Thuận An and Chân Mây ports. The province also asked localities to assign workers to be on duty all day to monitor the typhoon’s progress and arrange any response measures.

Residents are being moved to safety, with priority given to children, the elderly, pregnant women and disabled people. There are also plans to move 26,255 households with 99,424 people in case of flooding.

Thừa Thiên-Huế Province has 56 irrigation reservoirs and 12 hydropower reservoirs with a total capacity of about two billion cubic metres. Currently, the water level in the reservoirs is safe, and the reservoirs are ready to take on flood water.

Nghệ An Province has witnessed heavy rain over recent days, causing flooding of agricultural and aquatic areas, and landslides in some mountainous areas.

In Phú Yên Province, the provincial Steering Committee for Natural Disaster Prevention and Control on Sunday sent letters to localities and concerned organisations calling for preparations ahead of the typhoon. Heavy rain since Saturday evening submerged some low areas in Sông Cầu Town.

Localities have been told to closely monitor forecasts and bulletins, while keeping search and rescue forces ready for deployment.

The Phú Yên Border Guard Command said that it had 396 fishing boats with 2,377 workers. Of which 294 fishing vessels with 1,799 seamen working offshore, 102 fishing boats with 578 workers working near shore. All of them have received information about the supertyphoon.

The Quảng Trị Steering Committee for Natural Disaster Prevention and Control said that all 2,397 boats with 6,569 crew members in the province had received information about typhoon Noru. The province has 126 dams with a total capacity of over 260 million cubic metres.

Karding weakens to a typhoon as it makes second landfall