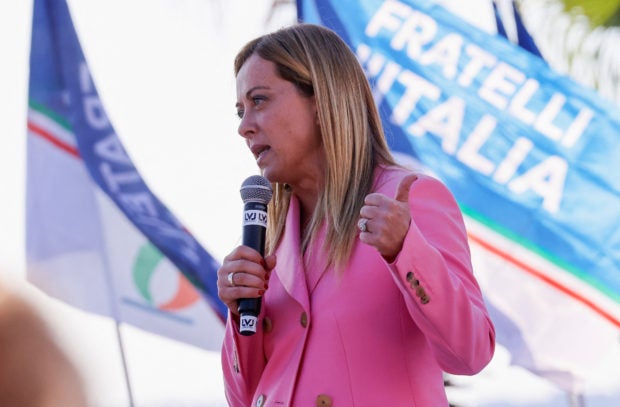 ROME  – A right-wing alliance led by Giorgia Meloni’s Brothers of Italy party was on course for a clear majority in the next parliament, giving the country its most right-wing government since World War Two.

Meloni, 45, plays down her party’s post-fascist roots and portrays it as a mainstream conservative group. She has pledged to support Western policy on Ukraine and not take undue risks with the third largest economy in the euro zone.

However, the outcome is likely to ring alarm bells in European capitals and on financial markets, given the desire to preserve unity in confronting Russia and concerns over Italy’s daunting debt mountain.

An exit poll for state broadcaster RAI said the bloc of conservative parties, that also includes Matteo Salvini’s League and Silvio Berlusconi’s Forza Italia party, won between 41% and 45%, enough to guarantee control of both houses of parliament.

“Centre-right clearly ahead both in the lower house and the Senate! It’ll be a long night but even now I want to say thanks,” Salvini said on Twitter.

Italy’s electoral law favours groups that manage to create pre-ballot pacts, giving them an outsized number of seats by comparison with their vote tally.

The result caps a remarkable rise for Meloni, whose party won only 4% of the vote in the last national election in 2018, but this time around was forecast to emerge as Italy’s largest group on around 22-26%.

But it was not a ringing endorsement, with provisional data pointing to turnout of just 64.1% against 74% four years ago — a record low number in a country that has historically enjoyed a high level of voter participation.

Although heavy storms in the south appeared to have deterred many from voting there, participation fell across a swathe of northern and central cities, where the weather was calmer.

Italy has a history of political instability and the next prime minister will lead the country’s 68th government since 1946 and face a host of problems, notably soaring energy costs and growing economic headwinds.

Initial market reaction is likely to be muted given that opinion polls had forecast the result accurately.

“I don’t expect a big impact although it’s not necessarily the case that Italian assets will do particularly well tomorrow (Monday) given how the market is starting to treat Europe and countries with worrisome public finances and exposure to the crisis and Ukraine,” said Giuseppe Sersale, fund manager and strategist at Anthilia in Milan.

The new, slimmed-down parliament will not meet until Oct. 13, at which point the head of state will summon party leaders and decide on the shape of the new government.

Your subscription could not be saved. Please try again.
Your subscription has been successful.
Read Next
35 families evacuated in Zambales town due to Karding
EDITORS' PICK
Only 38% of students grade 1 to 3 prefer local language as medium of instruction — Pulse Asia
House energy committee chair Arroyo bats for cheap electricity
Philippines central bank to focus on inflation at next policy meeting – governor
Omega Speedmaster super racing: Tiny device massive change
vivo Philippines offers a free bouquet of flowers and a premium necklace perfect for Valentine’s Day
ACT slams Edca on 124th anniversary of PH-American war: ‘Tila hindi umalis ang mananakop’
MOST READ
Philippines’ own ‘Anna Delvey’ arrested in Taguig City
Pokwang admits she lied about cause of split with Lee O’Brian: ‘Umasa akong aayusin pa niya’
Vice Ganda asserts all is well with Karylle, takes swipe at ‘kuya’ who chimed in to be ‘trending’
OWWA chief Arnell Ignacio: Socmed manager behind post on my love life
Don't miss out on the latest news and information.