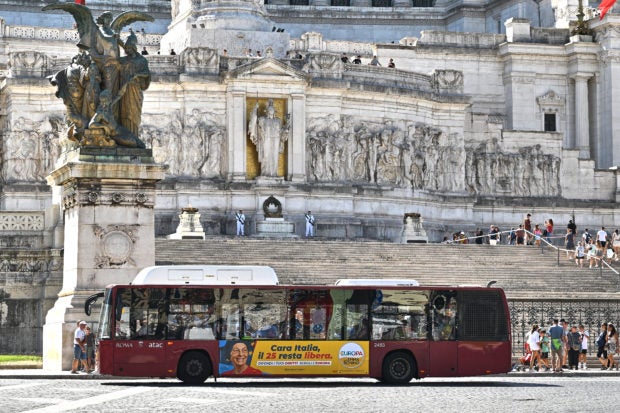 A campaign poster showing Emma Bonino, leader of the +Europa, is pictured on a public transport bus on September 2, 2022 in downtown Rome, ahead of the upcoming general political elections. AFP

ROME — Millions of people will not cast their ballots at the upcoming general election in Italy despite wanting to vote, because they are elderly, sick or live far from their hometowns.

Voter turnout has dropped from 92 to 74 percent between 1944 and 2021, and is expected to fall to 67 percent in the September 25 ballot, according to the Demopolis Institute think tank.

Most of those who don’t vote say they are not interested in politics or cannot find a party worth supporting.

But a white paper commissioned by the interior ministry and published in May found that just under half cannot cast their ballots for reasons beyond their control.

But it also concerns all those who study or work far from the place they are officially registered as living — where Italian law requires them to vote.

There are an estimated 4.9 million people in this group, or 10.5 percent of the electorate.

Many are young, and find the time, distance and transport costs too great.

Mayla Bottaro, a 24-year-old student in Bologna, said she would have to return to Liguria on the coast, a journey that takes over three hours by train — and one she is not willing to make.

“Why should I make this sacrifice when the state makes no effort to allow me to vote where I am?” she told AFP.

Transport companies are offering deals to make it easier for voters to return to their constituencies.

The airline ITA is offering a 50 percent discount on domestic flights, railways Trenitalia and Italo have reduced fares, and so have ferry companies between the mainland and islands.

Lorenzo Sangermano, 26, studies in Rome, but comes from Bergamo in the north, 600 kilometers (373 miles) away.

People are put off changing their official residence for many reasons: because they are renting, because taxes are more favorable in their home province, or simply because it is tediously bureaucratic.

Most of those who do not vote, despite wanting to, hail from Italy’s poorer south, which provides a large workforce for the richer north, the white paper shows.

“I won’t be voting. Who will pay for my trip?” asked Maria, a maintenance worker from Calabria, at the southern tip of boot-shaped Italy, who works in Rome.

It is not possible to vote by post within Italy, though it is from abroad.

Italian experts remain sceptical about voting by proxy — where ballots are entrusted to someone else — because of fears it would violate the strictly private nature of voting.

Electronic voting is also being ruled out for now, with millions of Italians lacking a good internet connection.