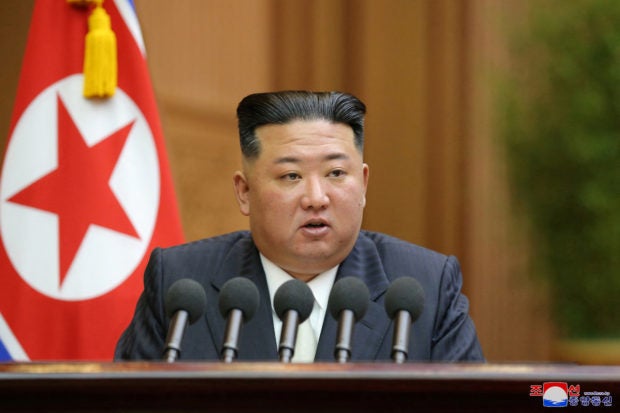 SEOUL — North Korea fired a ballistic missile towards the sea off its east coast on Sunday, ahead of planned military drills by South Korean and U.S. forces involving an aircraft carrier and a visit to the region by U.S. Vice President Kamala Harris.

South Korea’s military said it was a single, short-range ballistic missile fired from near the Taechon area of North Pyongyan Province just before 7 a.m. local time and flew about 600 km (373 miles) at an altitude of 60 km and a speed of Mach 5.

“North Korea’s launch of a ballistic missile is an act of grave provocation that threatens the peace and security of the Korean peninsula and international community,” South Korea’s Joint Chiefs of Staff said in a statement.

After the launch, the Joint Chiefs of Staff Chairman Kim Seung-kyum and the U.S. Forces Korea Commander Paul LaCamera discussed the situation and reaffirmed their readiness to respond to any threat or provocation from North Korea, it added.

South Korea’s National Security Council held an emergency meeting to discuss response measures and condemned the launch as an apparent violation of the U.N. Security Council Resolutions and an unjustifiable act of provocation.

South Korean President Yoon Suk-yeol, who arrived in Seoul late on Saturday from a trip to Britain, the United States and Canada, was briefed on the launch, the presidential office said.

Japan’s Defense Minister Yasukazu Hamada said Japan estimated the missile reached maximum altitude at 50 km and may have flown on an irregular trajectory. Hamada said it fell outside Japan’s exclusive economic zone and there were no reports of problems with shipping or air traffic.

Many of the short-range missiles tested by North Korea in recent years have been designed to evade missile defenses by maneuvering during flight and flying on a lower, “depressed” trajectory, experts have said.

“If you include launches of cruise missiles this is the nineteenth launch, which is an unprecedented pace,” Hamada said.

“North Korea’s action represents a threat to the peace and security of our country, the region and the international community and to do this as the Ukraine invasion unfolds is unforgivable,” he said, adding that Japan had delivered a protest through North Korea’s embassy in Beijing.

The U.S. Indo-pacific Command said it was aware of the launch and consulting closely with allies, in a statement released after the launch, while reaffirming U.S. commitment to the defense of South Korea and Japan.

“While we have assessed that this event does not pose an immediate threat to U.S. personnel or territory, or to our allies, the missile launch highlights the destabilizing impact of the DPRK’s unlawful Weapons of Mass Destruction and ballistic missile programs.”

The launch comes after the arrival of the nuclear-powered American aircraft carrier USS Ronald Reagan in South Korea to participate in joint drills with South Korean forces for four days from Sept. 26 to 29, and ahead of a planned visit to Seoul this week by Harris.

It was the first time the North carried out such a launch after firing eight short-range ballistic missiles in one day in early June, which led the United States to call for more sanctions for violating U.N. Security Council resolutions.

North Korea rejects U.N. resolutions as an infringement of its sovereign right to self defense and space exploration, and has criticized previous joint drills by the United States and South Korea as proof of their hostile policies.

The drills have also been criticized by Russia and China, which have called on all sides not to take steps that raise tensions in the region, and have called for an easing of sanctions.

After North Korea conducted an unprecedented number of missile tests this year, including its intercontinental ballistic missiles for the first time since 2017, the United States and South Korea said they would boost joint drills and military displays of power to deter Pyongyang.

But U.S.-South Korea security cooperation helps to deter a North Korean attack and counter Pyongyang’s coercion, and the allies should not let provocations stop them from conducting military training and exchanges needed to maintain the alliance, he added.