Seoul subway murder suspect says what he did was ‘truly crazy’ 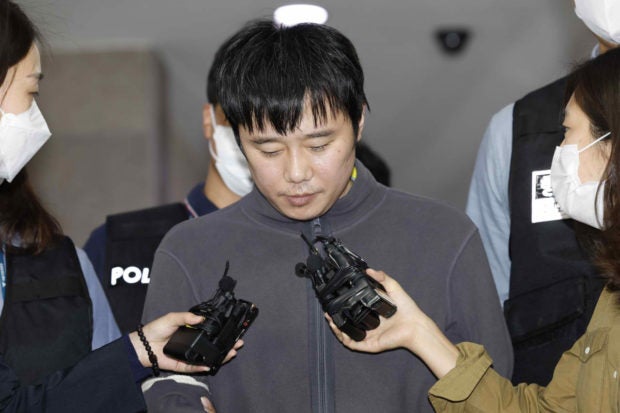 SEOUL — The suspect in the shocking subway murder case said Wednesday he “has done a truly crazy thing” as police referred him to the prosecution for further investigation and indictment.

The Seoul Metro employee was apprehended a week earlier at Sindang Station on Line No. 2 after stabbing a female colleague in her 20s to death in the subway station’s ladies’ room.

The case shocked the nation, as it was revealed the killing took place one day before a court was set to sentence him on charges of stalking her. The two had known each other since entering Seoul Metro the same year.

Police have since disclosed his identity as Jeon Joo-hwan, 31, and released a photo of him, a decision reserved for horrendous crimes.

“I am really sorry,” Jeon said in front of reporters at Seoul Namdaemun Police Station before police transferred him to the Seoul Central District Prosecutors Office.

“I have done a truly crazy thing,” Jeon said, repeating he was sorry in response to reporters’ questions, including whether he premeditated the crime.

Police have pressed a revenge murder charge against Jeon, a crime punishable by at least 10 years in prison, whereas murder is subject to a prison sentence of five years or more.

Jeon has told police he committed the crime out of “resentment” against her after prosecutors demanded a nine-year prison sentence for him in the stalking case on Aug. 18, officials said.

Police also said the case can be established as a premeditated crime, given that he looked for information on the victim’s workplace and duty hours before visiting her at the subway station, and brought a weapon, gloves and a hair cap from his home.

Jeon was relieved of duties at Seoul Metro after he was indicted in the stalking case. But he was able to find the victim’s former address and workplace via the firm’s intranet to which he still had access, police said, adding the suspect had visited the victim’s former house five times between Sept. 5-14 shortly before the murder. (Yonhap)