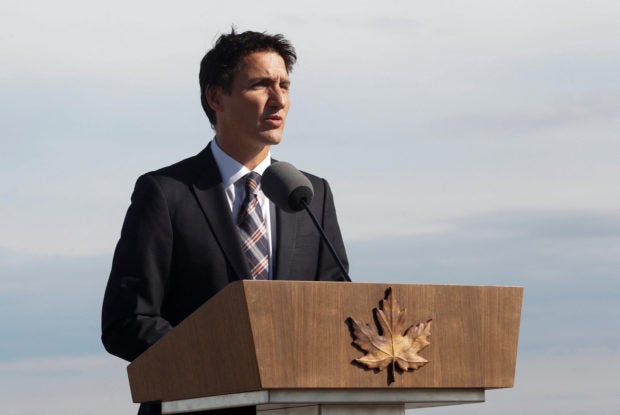 Canada’s Prime Minister Justin Trudeau speaks a day after multiple people in the province of Saskatchewan were killed and injured in a stabbing spree, in Ottawa, Ontario, Canada September 5, 2022. REUTERS FILE PHOTO

“Canada condemns Putin’s irresponsible escalation of the war, his partial military mobilization, his nuclear threats, as well as Russia’s rushed referendums to try to annex parts of Ukraine are unacceptable,” Trudeau told reporters in New York, where he is attending the United Nations General Assembly.

“Putin’s behavior only goes to show that his invasion is failing,” Trudeau said.

In a televised address earlier on Wednesday, Putin announced Russia’s first wartime mobilization since World War Two and plans to annex parts of Ukraine. He also threatened to use nuclear weapons to defend Russia, declaring: “It’s not a bluff”.

Trudeau said Putin’s conscription order was “a step closer to admitting what he has not wanted to admit to Russians … an example of things not going to his plan.”

Moscow calls its actions in Ukraine a “special military operation” to “disarm” its neighbor and root out dangerous nationalists. The West says it is a land grab and an attempt to reconquer a country that broke free of Moscow’s rule with the break-up of the Soviet Union in 1991.

Putin’s speech followed mounting casualties and battlefield setbacks for Russian forces, who have been driven from areas they had captured in northeast Ukraine in a Ukrainian counter-offensive this month and are bogged down in the south.

Trudeau said the threats of nuclear weapons need to be taken seriously and Western allies need to “stand very firmly against” them.

Canada would continue to support Kyiv by strengthening its sanctions on Russia and sending military aid to Ukraine, he said.

Read Next
Corruption in gov’t rampant now than before, says Enrile
EDITORS' PICK
Shop smarter with vivo’s big 12.12 holiday deals
The vivo Y02 is now available in the Philippines for only PHP 5,299
How not to retire as an ex-president
Hidilyn Diaz wins only gold missing from her collection
House energy committee chair Arroyo bats for cheap electricity
Lawmakers eyeing more changes in Maharlika plan
MOST READ
Jovit Baldivino, ‘Pilipinas Got Talent’ winner, dies at 29
Andi Eigenmann, family in Manila for a quick visit; Ellie dines with grandma Jaclyn Jose
LPA enters PAR, to likely strengthen into tropical depression in coming days – Pagasa
11 Filipino imports named to Japan B.League Asian All-Star team
Don't miss out on the latest news and information.