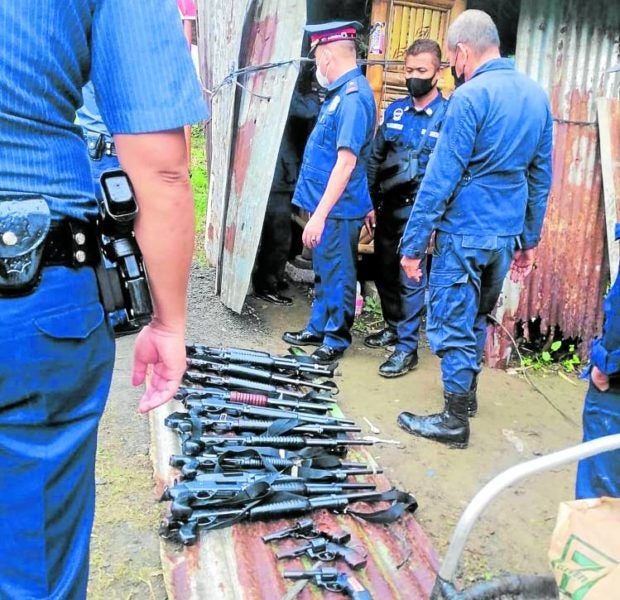 INVENTORY | Policemen on Monday prepare to document the firearms seized from men encamped along a road in the vicinity of Masungi Georeserve in Rizal province. (Photo courtesy of the Masungi Georesserve Foundation)

MANILA, Philippines — Armed men found occupying an area of the Masungi Georeserve will be fined a mere P1,000 each for not having in their possession their firearms licenses.

Otherwise, “no crime [was] committed” upon inspection by the police of the conservation site in Rizal province, an official of the Philippine National Police said on Wednesday.

On Monday, members of the Regional Civil Security Unit of Police Regional Office 4A, the Calabarzon police, confiscated 12 shotguns and three .38-caliber pistols from six security guards of the Sinagtala Security Agency Services whom the police found at Masungi—in particular, the area along Kilometer 48 of the Marikina-Infanta Highway.

Administrators of the Masungi Georeserve Foundation said those guards had been there for over a week now.

But according to Elpidio Mabonga, one of those guards, they had been there since Aug. 15. He also said there were 20 others (not counting himself) in that area.

Still, “[t]here was no crime committed during the conduct of post-to-post inspection, so no arrests were made,” said Brig. Gen. Leumar Abugan, chief of the Supervisory Office for Security and Investigation Agencies of the PNP.

But the guards were found without their licenses. Abugan said this was a violation of the revised implementing rules and regulations (IRR) of the Private Security Agency Law (Republic Act No. 5487).

According to Rule XVII of that IRR, “not having in possession [a] license to exercise profession, duty detail order and/or firearms license… while performing private security service” constituted a “less grave offense” for which the penalty would be suspension of one to six months or a fine of P500 to P1,000.

A further check by the police on the firearms licenses showed that while the 15 guns confiscated had licenses that were due to expire yet in 2024, Sinagtala’s own License to Own and Possess Firearms (LTOPF) had already expired on Jan. 30 this year.

Abugan said the LTOPF is a prerequisite for the issuance of the licenses for the confiscated firearms.

“We have initiated an investigation to ascertain the violations committed [by the security agency],” he said, as he cited the Comprehensive Firearms and Ammunition Regulation Act of 2012 (RA 10591)—which penalizes with imprisonment any officer of a company that “willfully or knowingly” allows the use of its firearms without any legal authority.

But for Billie Dumaliang, a trustee of the foundation, this matter was more than just a question of whether or not the weapons had proper licenses.

She said the very presence of those guards was already a violation of the Expanded National Integrated Protected Areas System Act of 2018 (RA 11038).

Under that law, illegal occupation and the erecting of structures constituted criminal acts. Dumaliang said this should have led to the arrest of those armed men.

She said earlier that the situation in Masungi had already been brought to the attention of the Department of Environment and Natural Resources, which said in response that it had forwarded a report to “appropriate offices for immediate action.”

“We expect the government and its agencies, especially the PNP, to do more than keep peace and order,” she said, adding that “They must enforce the law.”

As for Abugan’s suggestion that “it is better [for] the Masungi [Foundation to] file a complaint” against the agency that deployed the guards, Dumaliang noted that the aggrieved party in this case is “the Republic of the Philippines,” since the site is its “titled property,” in accordance with Presidential Proclamation Nos. 1636 and 573.

Those edicts issued by the father and namesake of President Marcos reserve several areas of Luzon, including Masungi, as “national parks,” “permanent forests” and “parcels of the public domain.”

“If this group and their security does… in Malacañang [what they did to Masungi], will they not [be] arrest[ed]? What makes it different here?” Dumaliang said.

“We will continue to ensure stability in Masungi as a protected environmental sanctuary. As long as everybody is cooperative, and acts according to their recognized rights and responsibilities, I am optimistic that this matter will be timely resolved,” he said in a statement.