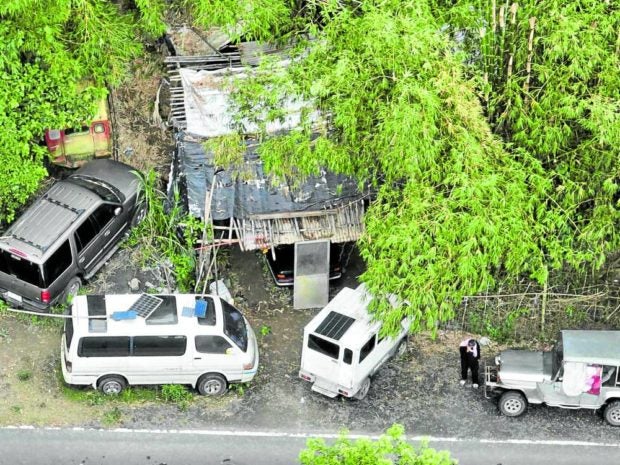 ‘INVASION’ Photo shows vehicles parked at a roadside of the Marikina-Infanta Highway within the vicinity of the conservation site. According to its administrators, the cars belong to armed men from a security agency sent to take over huge tracts of land. (Photo from the Facebook account of Masungi Georeserve)

MANILA, Philippines —  The Calabarzon Police Regional Office (PRO 4A) will beef up its visibility and patrols in the Masungi Georeserve in Baras near Tanay in Rizal, due to the continued of men from the Sinagtala Security Agency in the area.

“We will continue to ensure stability in Masungi as a protected environmental sanctuary. As long as everybody is cooperative, and acts according to their recognized rights and responsibilities, I am optimistic that this matter will be timely resolved,” Nartatez said.

As of Monday, police officers had already seized several shotguns and .38-caliber revolvers from the private security guards who had been encamped at Kilometer 48 on the Marikina-Infanta Highway for about a week. Masungi is at Kilometer 47 in Baras.

But no arrests were made.

According to the Masungi Georeserve Foundation, the men were intending to over portions of land in the conservation area.

Meanwhile, police said that the Sinagtala Security Agency’s license to own and carry firearms already expired last Jan. 30 and one guard had an expired license to practice his profession.

Nine of the guards also had no records with the Regional Civil Security Unit in Calabarzon (RCSU 4), while one had identical names on their list.

Because of this, the guards were directed to report to the RCSU 4A on Sept. 28 to submit supporting documents to disprove the findings during the inspection.

Meanwhile, the RCSU 4 is still evaluating the liability of the Sinagtala Security Agency corporate officers.

In it statement on Wednesday, PRO4A said that was investigating complaints against Ann Dumaliang, a co-founder of the Masungi Georeserve Foundation, for allegedly harassing and assaulting one of the caretakers of the area.

PRO4A said that one of the caretakers, Renita Tinay, claimed Dumaliang introduced herself as a member of the media and the Supervisory Office for Security and Investigation Agencies (SOSIA).

Dumaliang allegedly threatened them and ordered them to leave the area while taking photos and videos without permission.

Nartatez then directed Tanay Municipal Police Station to check the report and “institute the appropriate action.”

In a message to INQUIRER.net, Dumaliang denied the accusations and insisted that Tinay was the aggressor in the commotion.

“She was the aggressor while we were only trying to de-escalate and acquire information about the presence of the unidentified men,” Dumaliang said. “We have many evidence of Renita being the aggressor several times even when we have tried to de-escalate.”

She also denied claiming to be from the media or SOSIA, as the caretaker already knew her as “Ann from Masungi.”

In a video that Dumaliang showed INQUIRER.net, Tinay can be seen hitting one of her teammates — because they were filming her — while she was also filming Dumaliang’s team.

“We were taking documentation of the encroachment which is part of our responsibility. They were also taking videos which we welcomed,” she added.

The guards from Sinagtala Security Agency were staying in the area where Tinay was the caretaker.