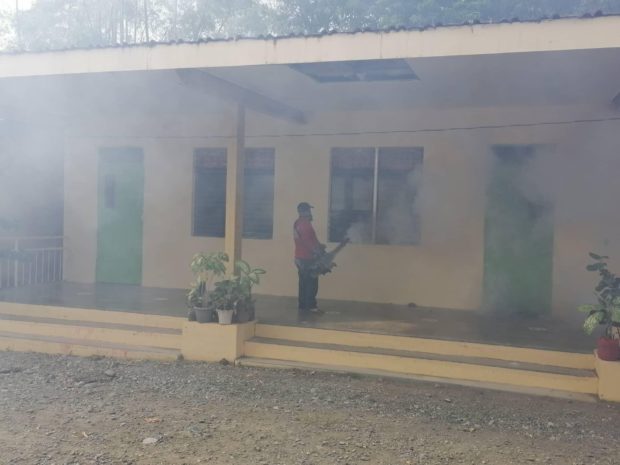 A worker from the provincial health office (PHO) of Zambales conducts fogging at a school in Candelaria town to destroy mosquito-breeding sites. (Photo courtesy of Zambales PHO)

SAN ANTONIO, Zambales — This province has registered 2,045 cases of dengue fever in the first nine months of this year.

Dr. Noel Bueno, provincial health director, told the Inquirer that as of MOnday, Sept. 19, the figure from January to the first half of September was 23 percent higher than the 1,572 cases reported during the same period last year.

“As of now, 31 of these patients are still recovering from the illness,” said Bueno.

Most of the active cases were from Castillejos town, which has 22 patients. Sta. Cruz followed with five, and Subic and San Antonio towns with two each.

A person gets infected with the dengue virus through the bite of an infected Aedes aegypti mosquito.

The provincial government has been carrying out measures, such as fogging to destroy mosquito-breeding sites. INQ