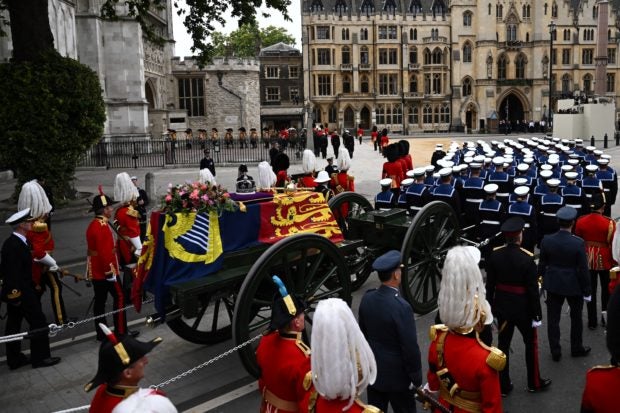 LONDON — Leaders and royalty gathered in London on Monday to mourn Queen Elizabeth amid scenes of matchless pageantry, a fitting end for Britain’s longest-serving monarch who won respect the world over for her 70 years on the throne.

King Charles and other senior British royals followed her flag-draped coffin into Westminster Abbey on Monday at the start of her state funeral, the country’s first since 1965 when Winston Churchill was afforded the honor.

Tens of thousands of people lined the streets as the queen’s casket made the short journey from Westminster Hall where she had been lying-in-state, pulled along on a gun carriage by 142 sailors with arms linked. A bell tolled and bagpipes skirled.

Pin-drop silence fell over London’s Hyde Park nearby as thousands of people, who for hours had picnicked and chatted, went quiet the second the queen’s coffin appeared on screens erected for the occasion.

Shortly before, hundreds of armed personnel in full ceremonial dress had marched in a historic display of kilts, bearskin hats, scarlet tunics and bands in white gloves.

Inside the abbey, lines of scripture were set to music that has been used at every state funeral since the early 18th century. Among those walking behind the casket was her great-grandson and future king, 9-year-old Prince George.

The 2,000-strong congregation included some 500 presidents, prime ministers, foreign royal families and dignitaries including Joe Biden of the United States and leaders from France, Canada, Australia, China, Pakistan and the Cook Islands.

Justin Welby, the Archbishop of Canterbury, told the congregation that the grief felt by so many across Britain and the wider world reflected the late monarch’s “abundant life and loving service.” 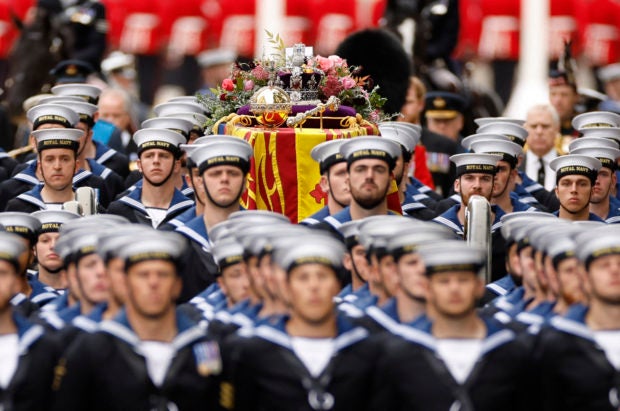 “Her late majesty famously declared on a 21st birthday broadcast that her whole life would be dedicated to serving the nation and Commonwealth,” he said.

“Rarely has such a promise been so well kept. Few leaders receive the outpouring of love that we have seen.”

Among the crowds who came from around Britain and beyond, people climbed lampposts and stood on barriers and ladders to catch a glimpse of the royal procession – one of the largest of its kind in modern history in the capital.

Those who had camped out in nearby streets were watching the service on smartphones, while hush descended along the Mall, one of London’s grand ceremonial boulevards, as the funeral service was relayed live through loudspeakers.

Some wore smart black suits and dresses. Others were dressed in hoodies, leggings and tracksuits. A woman with dyed green hair stood next to a man in morning suit as they waited for the procession to begin.

Millions more will watch on television at home on a public holiday declared for the occasion. The funeral of a British monarch has never been televised before. Around the wider capital, normally bustling streets were deserted.

Ben Vega, 47, a nurse from the Philippines standing at the back of the crowd on a stool, said he was a royalist.