Child cancer in PH: When inequality decides who lives or dies | Inquirer News

Child cancer in PH: When inequality decides who lives or dies 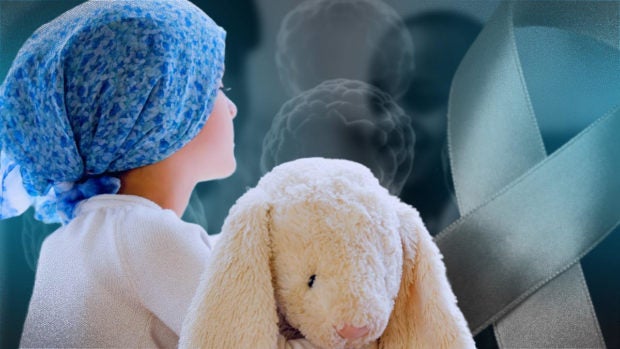 MANILA, Philippines—The World Health Organization (WHO) said that all over the world, cancer is the leading cause of death for children, especially because the likelihood of surviving depends on the country where the child lives.

Dr. Julius Lecciones, of the Philippine Children’s Medical Center, said that in the Philippines, 66 percent of children with cancer are diagnosed at advanced stages and abandonment of treatment is high at 80 percent.

This, he said, is the reason that the survival rate is low at less than 20 percent. Lecciones stressed that 75 percent of all cancers occur at age 50 years and older, and only 3 percent occur at age 14 years and younger.

Sen. Nancy Binay in Senate Bill No. 3028 said that 3,500 Filipino children are expected to develop cancer each year. This is equivalent to almost 10 children who will be diagnosed with cancer every day. 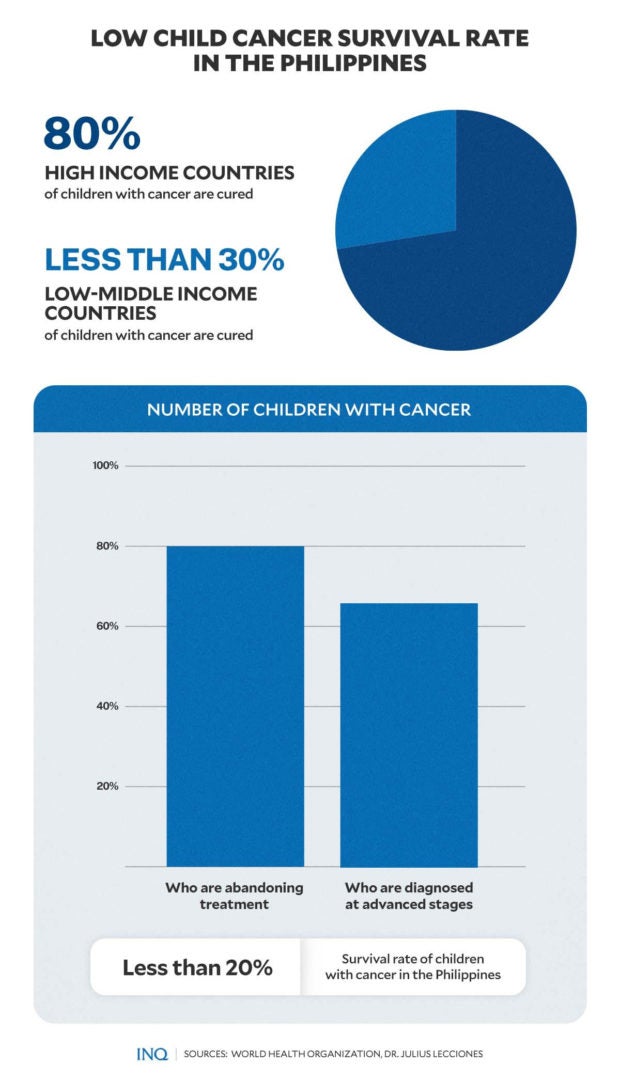 But she said that out of the 3,500, only 33 percent will be diagnosed and treated in medical facilities, stressing that in the Philippines, childhood cancer is not detected early enough for cure to be possible. 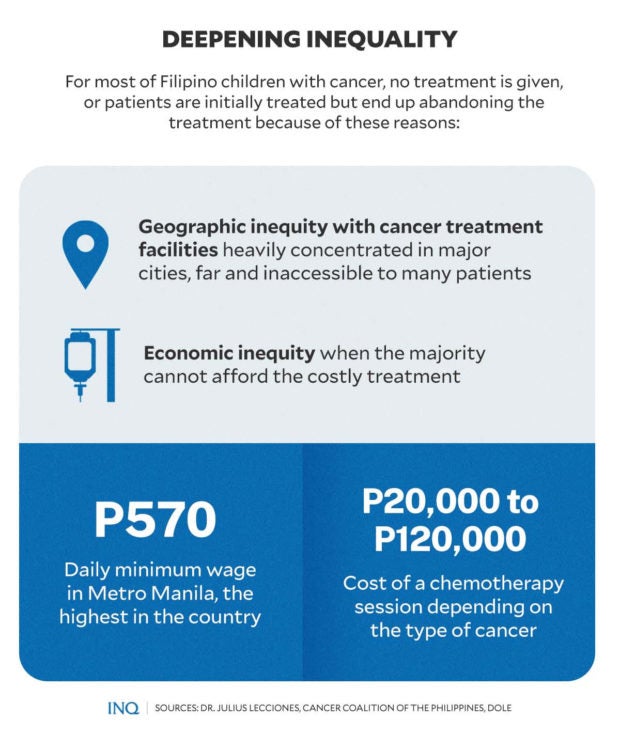 Based on data from the Cancer Coalition of the Philippines (CCP), 11 new cancer cases are diagnosed and that eight children die of the disease every day while seven adults die every hour.

The Department of Health (DOH) said in 2018 that yearly, there are 110,000 new cancer cases diagnosed and that 66,000 Filipinos, both children and adults, die of the non-communicable disease every year.

Last month, the Philippine Statistics Authority (PSA) said that in 2021, 19.99 million Filipinos (3.5 million families) were considered poor as poverty incidence rose to 18.1 percent from 16.7 percent in 2018.

This, as the minimum wage in the Philippines is still way below the think tank Ibon Foundation’s estimated P1,107 living wage—the income that a family of five, especially in Metro Manila, needs to live through each day.

This makes poverty one of the clear reasons that the survival rate of children with cancer in the Philippines is low at less than 20 percent, especially since the Mayo Clinic said that diagnosing cancer at its earliest stages often provides the best chance for a cure.

Based on data from the CCP, which was shared in 2020 by then Speaker Lord Allan Velasco, the cost of a breast ultrasound—which is but one of many tests for breast cancer—could range from P600 to as high as P3,000.

Depending on the type of cancer, a chemotherapy session could cost P20,000 to P120,000. He said that the high cost of cancer diagnosis and treatment could push Filipino families beyond reach of cancer treatments. 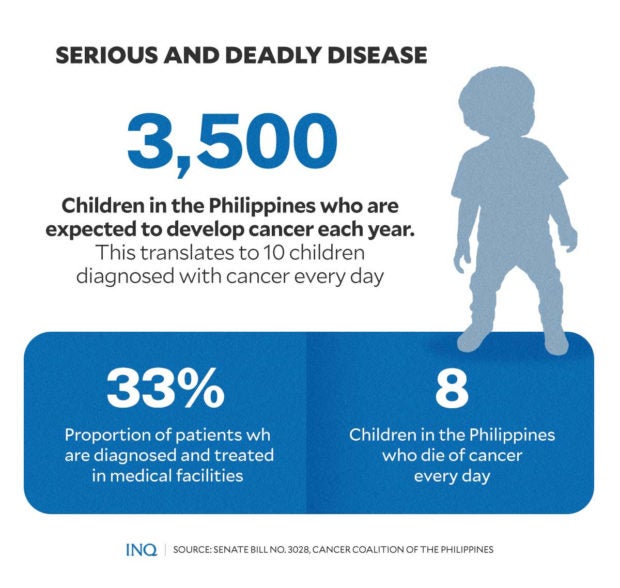 It was stressed by Velasco that “certainly, the economic burden of cancer care and treatment is overwhelming and it has the potential to drive Filipino families deeper into poverty”.

WHO said that out of the estimated diagnosis of childhood cancer yearly, leukemia accounts for 49 percent, while some cancers affect the brain and nervous system (9.7 percent), lymph nodes (9 percent), retina (7.5 percent), and kidney (3.4 percent).

Yearly, the world celebrates the International Childhood Cancer Awareness Month every September to promote awareness on cancer in children. This year, the DOH highlighted its message that “better survival is achievable through our hands”.

The National Nutrition Council (NNC) said that the most common childhood cancers in the Philippines are leukemia, lymphoma, brain tumor, bone tumor, and abdominal tumor.

It stressed that one of the things that contribute to the development of childhood cancer are genetic processes that occur in the first 1,000 days as this disease develops because of the interplay of genetic factors and high-risk environmental exposures.

The NNC shared this as an example: Advanced maternal age of 40 years old and above have a higher risk of giving birth to children with Down Syndrome–a condition where an individual has an extra chromosome.

“When combined with other environmental exposures such as radiation in pregnancy, drugs, and carcinogenic agents from cigarette smoking, the child is 10 to 20 times more at risk of developing leukemia when they reach 2 to 6 years old.”

It said that by controlling the environmental exposures in the first 1,000 days and early childhood, “we could also lower the risk of developing childhood cancers”. Here are some ways:

If the woman is 35 years and older and is planning to get pregnant, early genetic counselling for possible pregnancy risks is recommended because advanced maternal age increases the risk of giving birth to a child with Down Syndrome.

Mothers with comorbidities and other medical conditions may also have maintenance medications or treatment that must be considered for possible harm to the fetus, the NNC said.

It is important for the mother to avoid high risk environmental exposures that may increase the risk of developing cancer or may affect fetal development such as cigarette smoking or secondhand smoke, alcohol, and ionizing radiation.

These should also be avoided: risky sexual behaviors, cancer promoting foods such as processed meat and red meats, especially smoked or grilled food, and moldy nuts or seeds that may contain Aflatoxins which may promote cancer development.

The NCC said that in this period, the mother can also focus on adding cancer protective food such as fruits and vegetables, food that are rich in antioxidants, and Omega-3 rich food.

The NNC said that from birth to early childhood, exclusive breastfeeding and nutritious complementary feeding are the main factors that contribute to the infant’s nutrition and health in early infancy.

“Aside from these, childhood cancer can be prevented by completing immunization against Hepatitis B, which decreases the risk of Hepatocellular carcinoma in adolescence and adulthood.”

“Aside from vaccines, it is also good to limit early exposure to high radiation such as CT scan and secondhand exposure to cigarette smoke to reduce their risk of developing cancers in later life.”

WHO said cancer occurs in people of all ages and can affect any part of the body. It begins with genetic change in single cells, that then grow into a mass that invades other parts of the body and causes harm and death if left untreated.

Unlike cancer in adults, most childhood cancers do not have a known cause. Many studies have sought to identify the causes of childhood cancer, but very few cancers in children are caused by environmental or lifestyle factors. 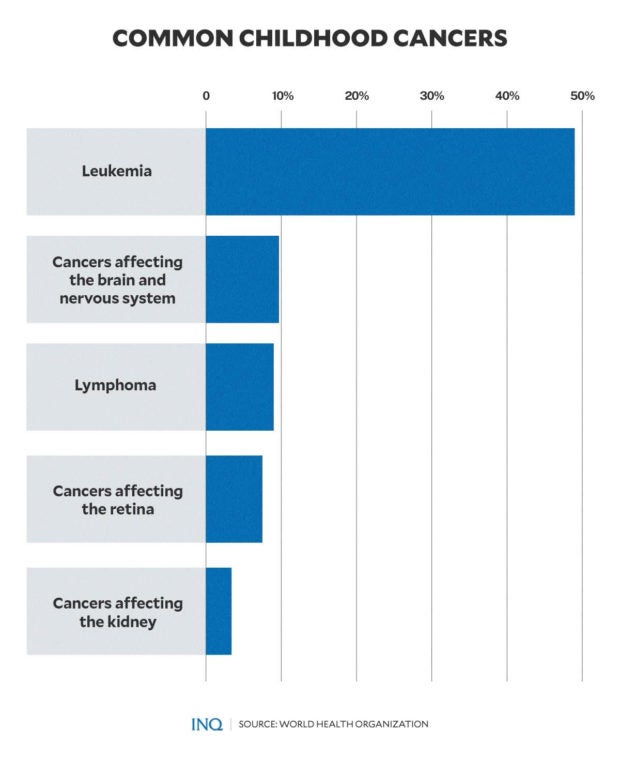 Lecciones said challenges to early detection and effective management of childhood cancer in the Philippines are these:

He said that because of financial reasons, those who are diagnosed to have cancer are not treated enough, with only one in five patients receiving gold standard treatment, mostly as paying patients.

As a result, Lecciones stressed that for most Filipino children with cancer, no treatment is given, or patients are initially treated but end up abandoning the treatment because of these reasons:

“There is a huge gap between the rich and the poorer patients. The cost of chemotherapy drugs and other supportive medicines remains the main barrier for the poorer service patients,” he said.

RELATED STORY: A test of patience: A day in the life of a cancer patient in the Philippines

‘Step in the right direction’

WHO said progress has already been achieved in the Philippines: “Thanks to tireless work from health advocates both within and beyond government.”

“The passage of landmark health legislation—the National Integrated Cancer Control Act in February 2019 and the Universal Health Coverage (UHC) Act in March 2019—has driven efforts to provide quality care, and reduce the burden on affected populations.”

Inherent in these legal tools are initiatives to strengthen the health system by building capacity in policy and research. The development of a national strategic action plan, creation of the Integrated Cancer Control Council, the establishment of the Philippine Cancer Center, and a sustainable Cancer Assistance Fund are just a few of the actionable touch points outlined, it said.

As early as 1988, the Philippine Cancer Control Program had been initiated as an integrated approach utilizing primary, secondary and tertiary prevention in different regions of the country at both hospital and community levels.

The goal was to establish and maintain a system that integrates scientific progress and its practical applications into a comprehensive program that will reduce cancer morbidity and mortality in the Philippines.

But Lecciones stressed that hardly is there any strategy directed specifically at childhood cancer as the program is primarily focused on the top adult cancer sites whose major causes are known.

“No strategy for early detection of childhood cancer had been included in the national programme, nor are there plans on how effective treatment in children could be implemented,” he said.

“This is probably because of the unfortunate notion that childhood cancer is a small proportion of the total data and therefore considered unimportant,” he said.

Lecciones said that this notion is “no longer tenable when viewed within the broader global context, and in how the disease affects the whole family in terms of major psychosocial disruptions, the broader economic issues of the disease, the prevailing human rights which should be accorded to children with this tragic malady, and the potentially high cure rates of cancer in children than in adults”.

RELATED STORY: Cancer in the time of pandemic