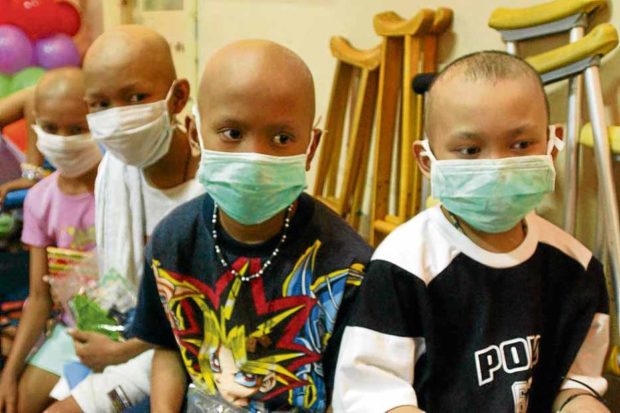 KIDS WITH CANCER Eleven new cancer cases are reported every day in the country, according to the Cancer Coalition of the Philippines. The group is pushing Congress to pass the proposed National Integrated Cancer Control Act. —EDWIN BACASMAS

Every day in the Philippines, there are 11 new cancer cases.

Seven adults die of cancer every hour and eight children die of this disease every day.

These alarming statistics, says the Cancer Coalition of the Philippines (CCP), show that cancer is a “growing and serious public health concern” in the country and that Congress should give priority to the passage of a law that will increase survivorship among Filipinos.

That is the proposed National Integrated Cancer Control Act, which the House of Representatives’ committee on health begins to tackle on Monday, according to coalition spokesperson Paul Perez.

“The meeting (on Monday) should push them to come up with a substitute bill covering an integrated national cancer control act,” Perez told the Inquirer on Sunday.

He said there were around 30 versions of the bill in the House.

He launched the project after his son fought—and won—a battle with leukemia.

Even with the statistics, there are still “many more (cancer cases) that remain uncounted, unrecorded and unreported,” said journalist Kara Magsanoc-Alikpala.

“With this data, we hope Congress sees cancer as an urgent health concern that needs legislative action now to address the different gaps in the cancer control program,” said Alikpala, herself a cancer survivor.

She said there had been “inroads” in the past seven years in the effort to put together a law aimed at saving more Filipinos from cancer death.

“But it’s still outpaced by the increase in incidences of cancer and deaths due to cancer,” she said.

A salient provision in the bill is the proposal for a P30-billion cancer assistance fund that will “support the medical and treatment assistance programs for patients.”

This emphasizes the financial burden that cancer imposes on patients and their families—regardless of their economic status.

“There is a high incidence of treatment noncompliance and abandonment due to high out-of-pocket payment in relation to the financial capacity of patients and their families,” said CCP member Daisy Cembrano.