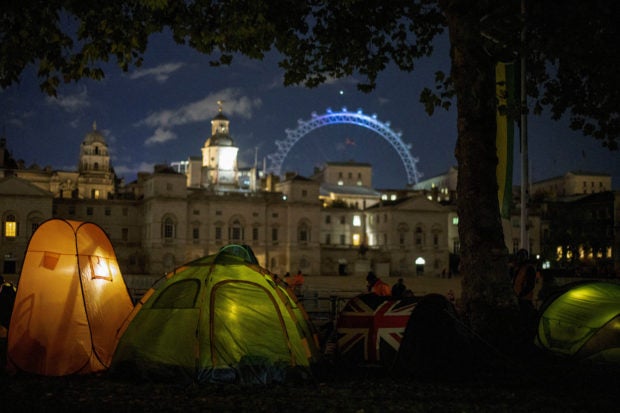 People camp a day before the funeral of Britain’s Queen Elizabeth, following her death, in London, Britain September 18, 2022. REUTERS

LONDON — Tens of thousands of people, many of whom had camped out overnight, lined the route of Queen Elizabeth’s funeral procession on Monday to bid farewell to the only British monarch most have ever known.

London’s City Hall said at 09:20 a.m. (0820 GMT) that all central viewing areas for the procession in the city were full.

“We wanted to come and see this historic event, to be part of it and to pay our respects to the Queen and thank her for her long life of service. I think we’ll probably feel fairly emotional at the end of it,” said Alison Cornish, 66, from Ashford in Kent.

Cornish was waiting on the Mall, London’s grand ceremonial boulevard by Buckingham Palace, where the crowd stood 15-20 people deep already at 8:30 a.m.

“Emotion is not something I try to exhibit, but I’m probably going to,” said her husband Robin, also 66.

The best prepared had tents, sleeping bags, flasks of tea and stepladders, while others were sitting or sleeping on the ground in only their jackets.

Melanie Odey, 60, a teacher, was at the front of the barriers along the Mall. She had camped in a tent with her two daughters and grandchildren after arriving on Sunday afternoon.

“This is a once-in-a-lifetime opportunity to be part of history, to pay your respects,” she said.

“The atmosphere is so unique. I had to come. It has definitely been worth it,” she said, adding that it was the least she could do to honor the late monarch.

“She cared so much about this country.”

There was a remarkable cross-section of society out on the streets, of young and old. People have arrived in London from all over Britain and the world to witness the state funeral.

Some were silent and sombre, dressed in black. Others were more upbeat. A group of three women dressed in Union Jack hats sang “God Save the Queen”. A woman with dyed green hair and facial piercings stood next to a man wearing a morning suit.

“I wouldn’t have missed this,” said Chugg, 51, who recalled seeing the queen as a child in 1977 during her silver jubilee.

“I was going to wear black, but it’s a celebration of the Queen’s life too, isn’t it? She liked to stand out in the crowd,” added Evans, 50, clad in a white hoodie and green blouse.

Anna Kathryn took a train at 3 a.m. from Richmond, in southwest London, in the hope of seeing the queen’s hearse. Like the majority in the crowd, she had never met or seen the queen. Yet she said her family felt they had a personal tie with her.

“It is like we have had a death in the family, we couldn’t miss this,” she said.

“She was such a bright spot in everyone’s lives and now it feels like that light has gone out.”

Some in the crowd said they were surprised to find themselves compelled to mourn with strangers.

Alistair Campbell Binnings, 64, left his home in Norfolk at midnight. “This is a one off. We would only be here for the queen. We just felt we had to be here,” he said.

“She was what we always needed in a time of crisis.”

As he prepared to watch a funeral rich in traditional pageantry, he said there was something uniquely British about the spectacle.

“Only Britain puts on something like this on such a grand scale,” he said. “I wouldn’t normally come to royal events, but we are witnessing history. Today, this is the place to be.”

Katie Williams, a 43-year-old nurse, arrived in London on Sunday. Clutching a bouquet of flowers in one hand and a packet of tissues up her sleeve, she called the queen the “granny to the nation”.

“She was a sort of magnet drawing people from all over the country. We all loved her, we all respected her.”