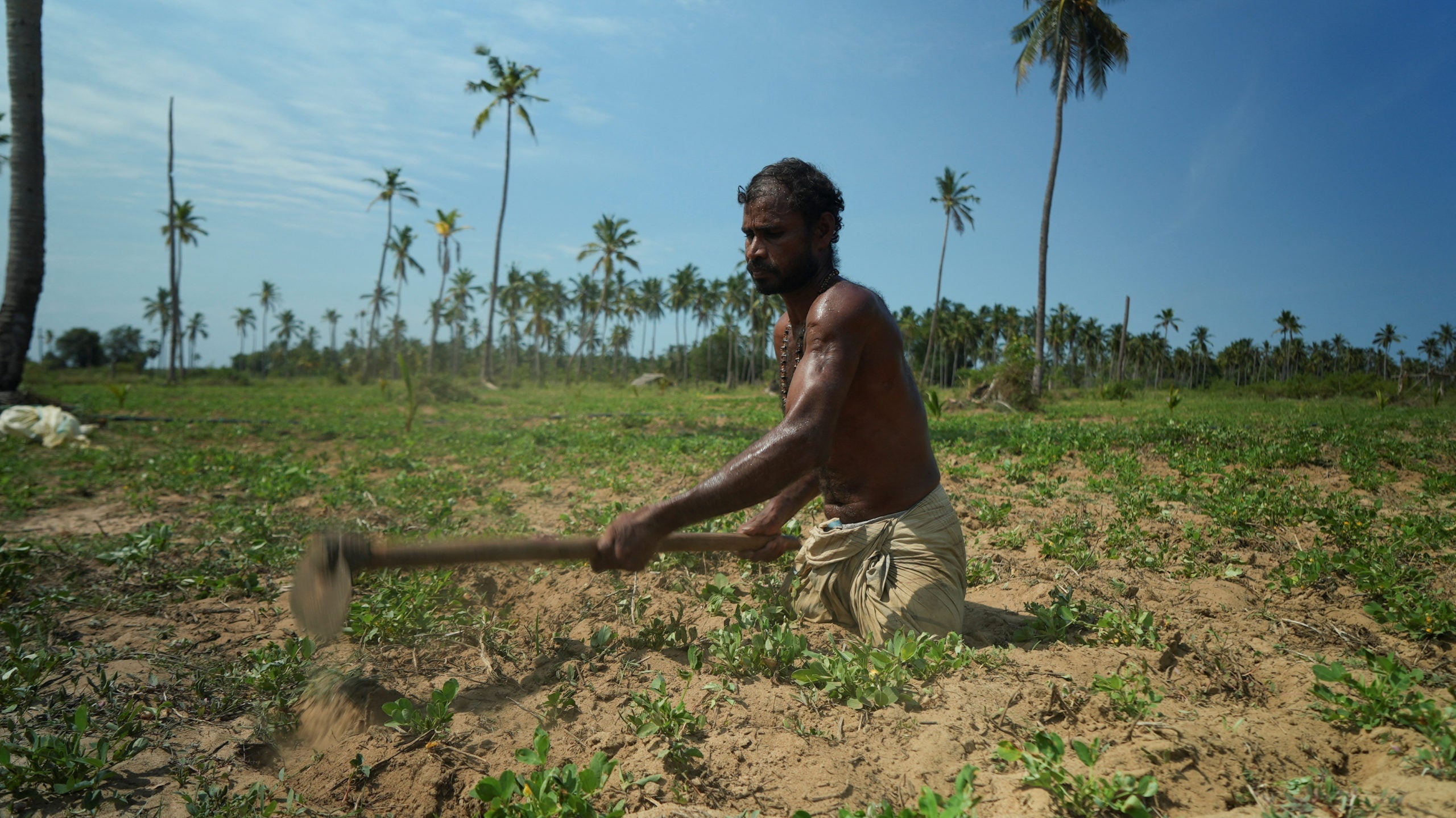 MULLAITIVU, Sri Lanka — Under a blazing sun, a 44-year-old Tamil laborer tended his rented patch of peanut field in Sri Lanka, striking his spade against the earth in a daily struggle to beat inflation that has put many necessities out of reach.

“I have more difficulties than a daily wage laborer,” said Singaram Soosaiyamutthu, who moves around on the palms of his hands after an air strike in 2009 took both his legs and injured his left arm.

That was during the last stages of a 26-year civil war between the Sri Lankan government and a militant group, the Liberation Tigers of Tamil Eelam.

Today’s economic crisis is a second blow for Soosaiyamutthu’s northern coastal district of Mullaitivu after the mostly Tamil population was ravaged by the war’s final offensive.

Many residents work as daily laborers to get by, he said, but he cannot.

“If I go for daily wage labor, nobody will hire me, and it’s also not possible for us to go and work like this, is it?” he asked.

He worked as a fisherman before the economic crisis, Sri Lanka’s worst in seven decades, dried up fuel supplies, forcing him to turn instead to peanut farming to earn money.

“Even if we have to control our own hunger, we can’t tell our children, ‘Look kid, this is all there is to eat, now just go to bed,’ can we?” he said.

His family is among 6.2 million Sri Lankans estimated to be food insecure by a United Nations’ Food and Agriculture Organization, as food inflation hit 93.7% last month.

Sri Lanka’s financial crisis is the result of economic mismanagement and the coronavirus pandemic, which destroyed its tourism sector, a key revenue earner.

For months the population of 22 million has struggled with power cuts, rampant inflation, a plummeting rupee and a shortage of foreign exchange reserves that made it difficult to pay for imports of food, fuel and medicine.

Mullaitivu is Sri Lanka’s second-poorest district, with 58% of households living in poverty, a Save the Children survey showed in June, and it has the largest number of those saying they lost all their income due to the crisis, about a quarter.

Nationwide, 31% of adult respondents said that, like Soosaiyamutthu, they cut back their food intake to feed their children.

“With this economic crisis, they are being pushed from bad to worse,” said Soma Somanathan, the founder of a charity, Tears of Vanni, that helps people in the region.

“They are actually being pushed back to the stage where they were directly after the war,” added Somanathan, who is based in Sydney.

Sentheepan Kalachelvi, disabled by shelling after being displaced during the final months of the war, said the adults in her family sometimes went hungry to ensure the children enough to eat and that she could only shower every other day due to fuel shortages.

“Poor people are still being pushed down in society around here,” said the 38-year-old housewife, who has a prosthesis replacing her left leg and the stump of a right arm.

Kalachelvi, widowed and unable to work because of her disabilities, relies on her mother’s work as a day laborer and gets 5,000 rupees ($14) a month from Tears of Vanni.

The U.N. refugee agency estimated in 2010 that the final stages of the civil war had internally displaced around 300,000 Tamils like Kalachelvi from their homes.

Sri Lanka is extending a welfare effort that covers 4 million homes to include those hit hardest by the crisis, said Neil Hapuhinne, secretary of the social empowerment ministry, and plans direct monthly cash transfers to 600,000 more people.

“The most deserving will be identified and helped,” Hapuhinne added, after 51.3 billion rupees ($146 million) was disbursed to 3.2 million households this year.

A loan of $200 million from the Asian Development Bank will also alleviate the food crisis, while the government has turned to the World Bank and U.N. agencies.

At dusk in Mullaitivu, Soosaiyamutthu dropped his spade at the end of the day. It will be two months before he can gauge the success of the peanut harvest.

“If prices went down, we wouldn’t struggle this much,” he said. “Now, even being 10% OK is a struggle. That’s how expensive things are.”