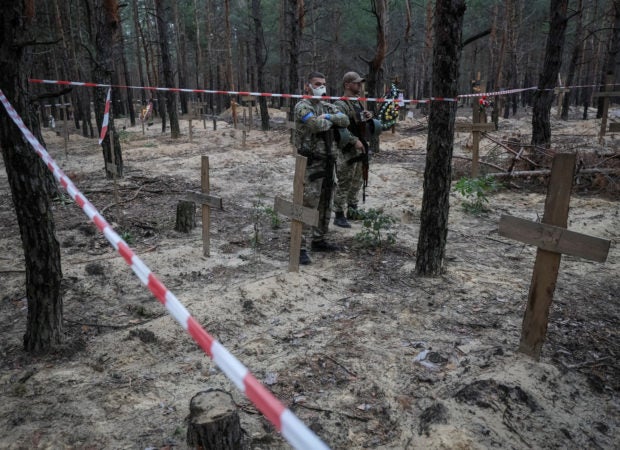 IZIUM, Ukraine — Ukrainian officials said on Friday they had found hundreds of bodies, some with their hands tied behind their backs, buried in territory recaptured from Russian forces, in what President Volodymyr Zelensky called proof of war crimes by the invaders.

Zelensky told Reuters in an interview many corpses were also interred in other sites in the northeast and appealed for foreign powers to step up weapons supplies, saying the outcome of the war hinged on their swift delivery.

“As of today, there are 450 dead people, buried. But there are others, separate burials of many people. Tortured people. Entire families in certain territories,” Zelensky said in his presidential office on Friday.

The head of the pro-Russian administration which abandoned the area last week accused Ukrainians of staging the atrocities at the city of Izium. “I have not heard anything about burials,” Vitaly Ganchev told Rossiya-24 state television.

Outside the city on Friday, officials wearing masks and protective suits were digging out bodies at the site in a forest where around 200 makeshift wooden crosses were scattered among trees.

“We are at the site of the mass burial of people, civilians who were buried here, and now according to our information they all have the signs of violent death,” Kharkiv Governor Oleh Synehubov said at the site.

“There are bodies with hands tied behind (their backs). Each fact will be investigated and will be properly and legally evaluated,” Synehubov said.

Officials laid the exhumed bodies out in white body bags. Some were wrapped in rags. One was in military fatigues. 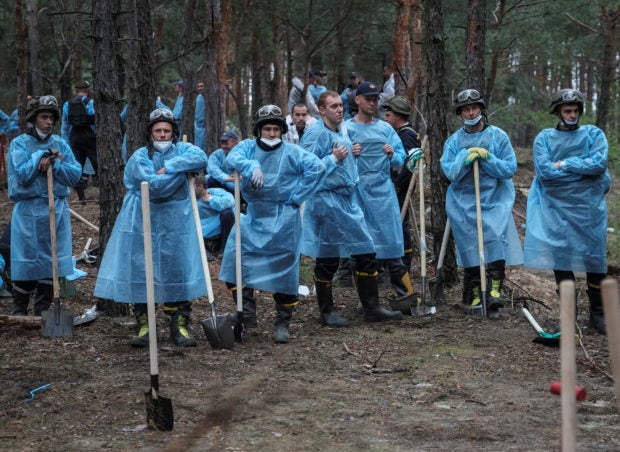 Members of Ukrainian Emergency Service rest as they work at a mass burial site during an exhumation, as Russia’s attack on Ukraine continues, in the town of Izium, recently liberated by Ukrainian Armed Forces, in Kharkiv region, Ukraine September 16, 2022. REUTERS/Gleb Garanich

In a separate video address on Izium, Zelensky said authorities had found a mass grave containing the bodies of 17 soldiers, some of which bore obvious signs of torture.

If the number of bodies is confirmed, the site in Izium, a former Russian front-line stronghold, would be the biggest mass burial found in Europe since the aftermath of the 1990s Balkan wars.

U.S Secretary of State Antony Blinken said he had heard the reports. “This is part, horrifically, of … an ongoing story. Whenever we see the Russian tide recede from the parts of Ukraine that it has occupied, we see what’s left in its wake.”

Blood on the floor

Russian President Vladimir Putin did not immediately respond to the accusations, but brushed off Ukraine’s lightning counter-offensive and warned that Moscow would respond more forcefully if its troops were put under further pressure.

Speaking after a summit of the Shanghai Cooperation Organisation in the Uzbek city of Samarkand, Putin cast the invasion as a necessary step to prevent what he said was a Western plot to break Russia apart.

“The Kiev authorities announced that they have launched and are conducting an active counter-offensive operation. Well, let’s see how it develops, how it ends up,” Putin said with a grin.

Russia regularly denies targeting civilians during what it calls its “special military operation” in Ukraine and has said in the past that accusations of human rights abuses are a smear campaign.

In Kupiansk, a northeastern railway junction city whose partial capture by Kyiv’s forces on Saturday cut Russia’s supply lines and led to the swift collapse at the front, small units of Ukrainian troops were securing a nearly deserted ghost town.

A formerly Russian-occupied police station had been hastily abandoned. Russian flags and a portrait of Putin lay on the floor amid broken glass. Records had been torched. Behind the steel doors of the station’s jail cells there was blood on the floor and stains on the mattresses.

Three piglets on the loose from an abandoned sty were foraging in the city street. Serhiy, a middle-aged man in a thin jacket, was hungry for news.

After a week of rapid gains in the northeast, Ukrainian officials have sought to dampen expectations that they could continue to advance at that pace. They say Russian troops that fled the Kharkiv region are now digging in and planning to defend territory in neighbouring Luhansk and Donetsk provinces.

“It is of course extremely encouraging to see that Ukrainian armed forces have been able to take back territory and also strike behind Russian lines,” NATO Secretary-General Jens Stoltenberg told BBC radio.

“At the same time, we need to understand that this is not the beginning of the end of the war. We need to be prepared for the long haul.”

Ukraine has also launched a major offensive to recapture territory in the south, where it aims to trap thousands of Russian troops cut off from supplies on the west bank of the Dnipro river, and retake Kherson, the only large Ukrainian city Russia has captured intact since the start of the war.

In the east, the chief prosecutor of the pro-Russian separatist administration in Luhansk was killed by an explosion in his office, along with his deputy, according to Russian news agencies. Pro-Russian authorities said a husband and wife working to arrange a referendum on joining the southern city of Berdiansk to Russia had also been killed overnight.

Russia also reported strikes across the border in its Belgorod region.