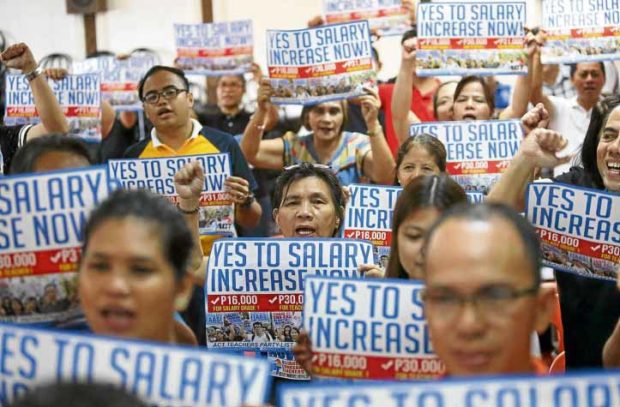 MANILA, Philippines — A teacher’s group on Thursday disputed the remark of Vice President and Education Secretary Sara Duterte on increasing the salary of public school instructors.

Teachers in both the public and private sectors are “underpaid” and looking for new employment opportunities abroad,  the Alliance of Concerned Teachers (ACT) said.

It added that Duterte’s argument that higher pay for public school instructors would lead to the closure of private schools is disproved by the reality that teachers from those institutions would instead move into the public sector.

To prevent losing “the best of our teachers,” ACT chairman Vladimer Quetua asked the Department of Education to act swiftly on this exodus.

“Teachers in public and private [schools] are both underpaid,” said Quetua, noting that 92 percent of public school teachers have a salary of P25,000 to P30,000 a month. ACT said there are private school teachers who receive a monthly pay of P6,000.

The low salaries in the Philippines, according to Quetua, constitute a significant factor in why many Filipino teachers look abroad for employment.

“Leaving their own families and the Filipino students that they vowed to serve is a difficult decision that teachers make, but the government is leaving us with no other choice, especially with such stance of the DepEd being unsupportive of our call for salary upgrading,” he added.

“In no time, we will be losing the best of our teachers both in the public and private sector if the government does not remedy our situation quickly,” he further said.

Quetua was also critical of Labor Secretary Bienvenido Laguesma, who Vice President Duterte reported suggesting that public school teachers’ salaries should be in line with the private sector.

“The government, being the biggest employer of teachers, is well in the position and has the responsibility to set the teachers’ salaries at decent levels,” he said, emphasizing that 75 percent of basic education teachers are hired by the government.

“In fact, it should also subsidize the salaries of teachers in small private schools which truly have no capacity to pay decent salaries to their teachers’ if it sees these private schools as partners in education delivery,” he added.