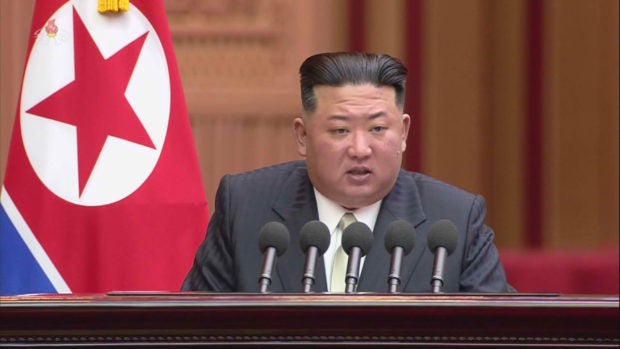 SEOUL — North Korean authorities have stressed the country must not yield to sanctions from the international community and continue on the road to self-reliance, lashing out at the South Korean government’s “audacious initiative” policy and rejecting its proposal for talks between authorities to solve the problem of separated families.

The Rodong Sinmun, the official newspaper of the ruling Workers’ Party, said in an editorial on Wednesday, “Imperialists regard sanctions as an all-around means, but we will strive to follow the way of independence.” It strongly criticized the “ferocity of imperialism” that would ultimately “deprive our national dignity and pride.”

This supports leader Kim Jong-un’s speech on Sept. 8, in which he made clear that the country has no intention to negotiate on denuclearization, claiming the ultimate purpose of the US is to collapse its regime. “We cannot give up the right to live and defend ourselves, just to ease ourselves from some difficulties at hand,” Kim said in the speech.

North Korea also promulgated a revised law regarding nuclear weapon usage on Sept. 8, stipulating the conditions to launch nuclear weapons. The revised version enabled a preemptive nuclear strike, “automatically and immediately,” based on arbitrary judgment as to whether the country is in danger.

A series of statements and amendments strongly reject the Yoon Suk-yeol government’s “audacious initiative,” a road map to the denuclearization of North Korea and the entire peninsula. The plan was unveiled in Yoon’s Liberation Day speech last month on Aug. 15, which is to provide economic support and build mutual trust when North Korea returns to the denuclearization negotiations table.

The North’s propaganda outlet Echo of Unification issued an explicit editorial titled “Audacious delusion” on Wednesday directly denouncing the Yoon administration’s policy. The editorial openly criticized Unification Minister Kwon Young-se, who urged the North to respond to the government’s “audacious initiative” through his opening speech at the 2022 Korea Global Forum for Peace on Aug. 30.

Kwon stressed that if North Korea just changes its current attitude, South Korea will cooperate with the US and China to draw full support from the international community. “We sincerely hope and urge (North Korea) to seriously review our proposal and engage in dialogue in a constructive manner,” said Kwon. The editorial derided Kwon and the Unification Ministry by calling it a “fratricidal ministry.”

Kwon had also proposed talks on the issue of separated families, but the North has yet to respond to the plan.

Amid the North’s ongoing provocations and ridicule, South Korean military authorities and the US maintain a firm status.

Regarding North Korea’s revised law to enable a “preemptive nuclear attack,” Moon Hong-sik, deputy spokesman for the Ministry of National Defense, said during a briefing on Monday, “If North Korea attempts to use nuclear weapons, we warn that its regime will face an overwhelming response from South Korea and the US alliance.”

“The South Korean government’s position to push for complete denuclearization of North Korea is firm,” He said, stressing that close cooperation with the US will further strengthen the implementation of the Korea-US alliance to effectively deter the North from depending on nuclear power.

Also, an Extended Deterrence Strategy and Consultation Group session will be held in Washington on Friday to discuss deterrence measures to curb the threat of a nuclear attack.

Vice Defense Minister Shin Beom-chul arrived at Dulles Airport outside the US capital on Monday to attend the EDSCG meeting. “We will confirm the US commitment to strengthen the deterrence against North Korea’s threats and discuss specific measures to enhance its implementation,” Shin said .

The US military had also ensured its position to push ahead deterrence against nuclear power. Air Force Brig. Gen. Pat Ryder, press secretary for the US Department of Defense, guaranteed the US’ capability to restrain North Korea, saying, “We have verified and accurate policies and procedures for nuclear deterrence,” during Monday’s briefing. Regarding North Korea’s newly revised law, he criticized it as “an unhelpful and unstable remark that North Korea has already repeated in the past.”

Pope Francis asks North Korea to invite him to visit