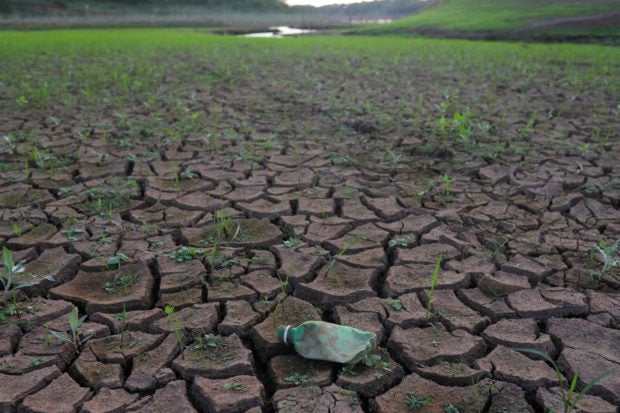 A crushed bottle is seen on the dry ground of the Jaguari dam, which is part of the Cantareira reservoir system, during a drought in Joanopolis, near Sao Paulo, Brazil, Oct. 8, 2021. (REUTERS/Amanda Perobelli/File Photo)

MANILA, Philippines — The earth is at risk of triggering multiple climate tipping points if global temperatures continue to rise beyond 1.5 degrees Celsius above pre-industrial levels, according to a sobering new analysis that underscored the urgent need to decarbonize the planet to limit the risk of crossing dangerous levels.

Even at current levels of global heating, the planet already risks facing five climate tipping points—and the risks increase with each tenth of a degree of further warming, according to the study published in the journal Science last week.

A team of researchers from the University of Exeter, Stockholm Resilience Center, Future Earth, and Potsdam Institute for Climate Impact Research has identified at least 16 critical tipping points, of which five may already be triggered at today’s temperatures.

These include the collapse of Greenland’s ice cap and of a key current in the north Atlantic; abrupt thawing of the boreal permafrost, or the frozen land in the Arctic; the collapse of a convection in the Labrador Sea, which is between Greenland and the Labrador Peninsula, and the massive die-off of tropical coral reefs.

Even worse, five more tipping points become possible at 1.5 C, including changes to northern forests and the loss of almost all mountain glaciers, leading to unprecedented sea level rise.

“We can see signs of destabilization already in parts of the West Antarctic and Greenland ice sheets, in permafrost regions, the Amazon rainforest, and potentially the Atlantic overturning circulation as well,” study lead author David Armstrong McKay said in a statement.

Scientists have been on the lookout for climate tipping elements, which are critical, large-scale components of the earth that remain stable at certain global temperatures but can change once a particular threshold is breached.

Even just very small additional disturbances can tip them over, causing severe impacts on the environment and even a chain reaction on multiple systems.

This was, in part, why the Paris Agreement, a legally binding international treaty on climate change, and other efforts to limit global warming have set a cap of 1.5 C, because the risk of more tipping points escalates beyond this level.

Among others, the latest study argued that the planet may have already left a “safe” climate state when global temperatures exceeded 1 C warming.

Given the current numbers, the world is actually headed toward 2-3 C of global warming, it warned.

“This sets earth on course to cross multiple dangerous tipping points that will be disastrous for people across the world. To maintain liveable conditions on earth, protect people from rising extremes, and enable stable societies, we must do everything possible to prevent crossing tipping points,” said coauthor Johan Rockström, cochair of the Earth Commission and director of the Potsdam Institute for Climate Impact Research.

To have a 50 percent chance of achieving 1.5 C and thus limiting tipping point risks, the study said, global greenhouse gas emissions must be cut by half by 2030, reaching net-zero by 2050.

“To achieve that we now need to trigger positive social tipping points that accelerate the transformation to a clean energy future,” said coauthor Tim Lenton, director of the Global Systems Institute at the University of Exeter. “We may also have to adapt to cope with climate tipping points that we fail to avoid, and support those who could suffer uninsurable losses and damages.”

The study, which was based on paleoclimate data, current observations, and the outputs from climate models, hoped to underscore that many tipping elements were actually interlinked, making cascading a serious concern.

“In fact, interactions can lower the critical temperature thresholds beyond which individual tipping elements begin destabilizing in the long-run,” said coauthor Ricarda Winkelmann.