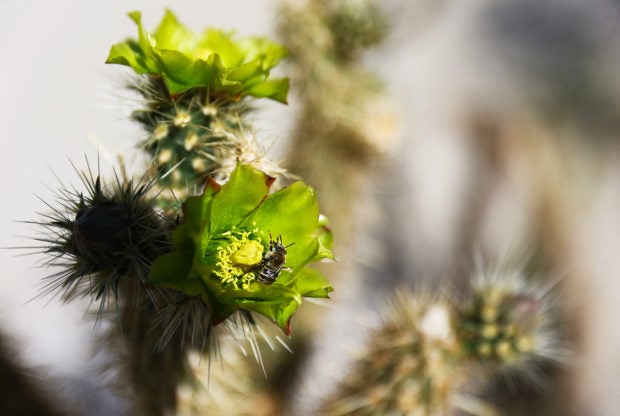 A bee works to collect nectar from a flowering cholla cactus in Anza-Borrego Desert State Park, which is threatened by climate change, on March 23, 2022 near Borrego Springs, California. A 2021 UC Irvine study found that native vegetation declined close to 40 percent from 1984 to 2017 in California’s Colorado Desert region which includes the park.  (Getty Images via AFP)

PARIS, France  – Sixty percent of cactus species will wind up in less hospitable climates over the coming decades as global warming sets in, according to new research challenging the long-held assumption the iconic desert plants will thrive with more heat.

By 2070, up to 90 percent could be threatened with extinction due to climate change, habitat loss and other stressors, triple the current percentage, scientists reported in Nature Plants.

Some 1,500 species of cacti spread across the Americas live in varying climes, ranging from sea-level deserts to the high Andes mountains, from bone-dry ecosystems to humid tropical forests.

Biodiversity hotspots rich in species and numbers include central Mexico and the Brazilian Atlantic Forest.

To test the notion that cacti will benefit from a warmer and more drought-prone world, researchers led by Michiel Pillet from the University of Arizona examined data on more than 400 species and ran models projecting how they would fare at mid-century and beyond under different greenhouse gas emissions scenarios.

The findings “paint a more pessimistic future,” according to the study, published Thursday.

Currently, the main threat to cacti is expanding agriculture, along with land degradation, biodiversity loss and harvesting for various uses.

Even without climate change, cacti “is one of the most endangered groups of organisms on the planet,” with more than 30 percent classified as at risk of extinction, the authors note.

Under a moderate emissions scenario in line with current policies, global warming will soon be a significant threat as well.

“Our results suggest that climate change will become a primary driver of cactus extinction risk, with 60 to 90 percent of species assessed negatively impacted” by global warming, the researchers reported.

Within four or five decades, some 25 percent of cacti species could experience unfamiliar climates over a quarter of their current range.

Earlier studies have shown impaired photosynthesis — the process by which plants use sunlight to make foods from CO2 and water — with only two degrees Celsius of global warming.

Earth’s average surface temperature, including oceans, is already 1.1C warmer than preindustrial times, and about 1.7C warmer over land only.