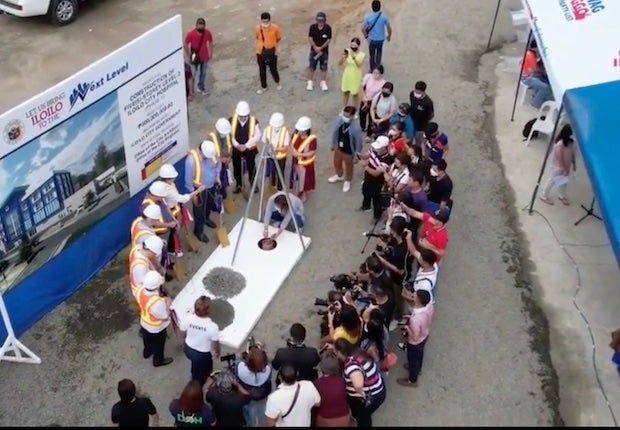 The groundbreaking for the Iloilo City Hospital and Medical Arts Building was conducted on Friday, Sept. 9, 2022. (Photo from the Facebook account of the Iloilo City government)

The facilities — a two-tower, five-story hospital with 200 beds and the five-storey Medical Arts Building — are all inside the city government’s complex in Barangay San Pedro.

The structures will be an addition to two buildings under construction alongside the Uswag Molecular Laboratories and Dormitory and Commission on Elections’ Regional Integrated Field Office, which broke ground last August.

The hospital will have four departments — executive administrative, emergency, outpatient, surgical, and obstetrics.

The emergency department has decontamination and isolation rooms, especially for patients with COVID-19 or other infectious diseases. The outpatient department includes an x-ray room, laboratories, blood stations, and pharmacies.

The hospital beds will be in the nursing ward in a tower separate from the three departments.

Funding was appropriated from the national government, with P500 million for the city hospital, via Republic Act No. 11891, and implemented by the city government.

Treñas had previously stated that the budget would be dedicated to procuring equipment including magnetic resonance imaging (MRI), computerized tomography (CT) scan, x-rays, and for the operating rooms.

In a press conference before the groundbreaking, Drilon, one of the sponsors of Republic Act No. 11891, said that the development of a local hospital and medical arts building in the city was critical to the country’s healthcare system.

He cited the country’s backlog of hospital beds and doctors, which were further exacerbated by the ongoing COVID-19 pandemic from 2020.

“We saw here in Iloilo City, and in the whole of the Philippines, we are really lacking in hospitals. That is why the inadequacies in our health system resulted in the deaths of over 800,000 people due to COVID. Patients have to go around just to look for a hospital [with vacancies], and hospitals are already spilling patients to their parking lot,” Drilon said.

“The [critical] gap in our hospital system can be attributed, in our view, to the lack of capacity for hospital beds, the capability or the lack of enough personnel, and the corruption that we see in the health system as exemplified by the Pharmally and PhilHealth [scandals],” he added.

7 private hospitals in Iloilo City to renew accreditation with PhilHealth