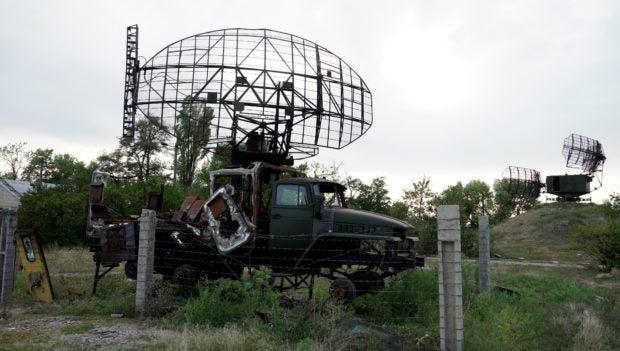 This photograph taken on September 10, 2022 shows destroyed Ukrainian military vehicles outside the city of Melitopol in Zaporizhzhia region, amid ongoing Russian military action in Ukraine. AFP

KYIV — Ukraine said Sunday the sixth and final reactor at the Russian-controlled Zaporizhzhia nuclear power station in the south of the country was no longer generating electricity.

“Today, September 11, 2022, at night, at 03:41 am (0141 GMT), unit No. 6 of the ZNPP was disconnected from the power grid. Preparations are underway for its cooling and transfer to a cold state,” state nuclear agency Energoatom said in statement.

Ukraine and its allies have been increasingly concerned about the safe operation of the Zaporizhzhia plant — the largest in Europe — and recent fighting there has raised fears of serious incident.

The UN’s atomic watchdog warned earlier this week that a blackout in the nearby town of Energodar had “compromised the safe operation” of the nuclear facility.

Energoatom said Sunday that a cold shutdown was the “safest state” for the reactor.

Energoatom said that the sixth reactor had been generating energy for the plant itself for three days and that the decision to halt its operations came when external power had been restored to the facility.

“In case of repeated damage to the transmission lines linking the facility to the power system — the risk of which remains high — the (plant’s) in-house needs will be powered by diesel generators,” it cautioned in a statement.

Energoatom in its statement again called for the establishment of a demilitarized zone around the plant, saying it was the only way to sure plant’s safety.

Disconnected reactor of Zaporizhzhia nuclear plant back on Ukraine’s grid