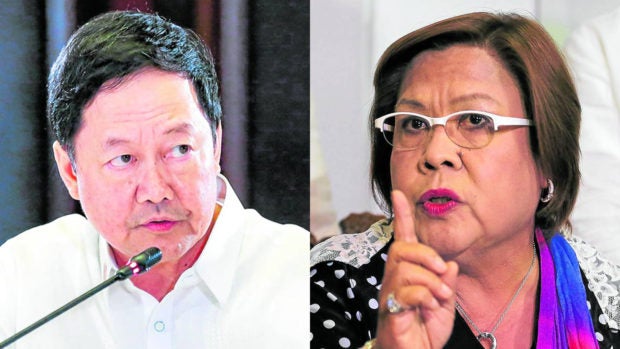 MANILA, Philippines — Former Sen. Leila de Lima criticized the Office of the Solicitor General (OSG) on Saturday for denying that the previous Duterte administration had a hand in the drug war killings.

“It is callous and narrow-minded, if not dishonest, for OSG to deny the existence of a state-sponsored systematic attack when we all witnessed the prevalent, almost daily occurrence … of summary executions of suspected drug offenders,” De Lima said in a statement.

She said the OSG could not persuade the International Criminal Court (ICC) to deny the request of its prosecutor, Karim Khan, to resume the investigation of the drug war killings in connection with the crimes against humanity complaint filed against then-President Rodrigo Duterte.

The ICC Pre-Trial Chamber has asked the Philippine government to comment on the prosecutor’s request.

In response, Solicitor General Menardo Guevarra asked the ICC last Thursday to deny the request since Philippine authorities were already probing the complaints arising from the drug war.

Guevara added that the killings did not constitute “crimes against humanity” as they were not an “attack” against the civilian population.

“These porous claims cannot persuade the ICC,” De Lima said in reaction. “The ICC is the least of all to believe these claims considering the amount of evidence already gathered by the ICC Prosecutor showing that the killings were indeed state-sponsored.”

“And the thousands of victims were not part of the civilian population? So what are they? Subhumans or part of the animal kingdom?” De Lima said in a mix of Filipino and English.

Asked for his reaction, Guevarra said De Lima was entitled to her own opinion.

“We trust in the fairness, objectivity, and good sense of the ICC pre-trial chamber,” Guevarra told INQUIRER.net in a text message.

“This is not about the personalities involved; this is about the capability of our entire legal system to dispense justice,” Guevarra added.

According to the government’s “Real Numbers PH” program, around 6,200 drug suspects were killed in official police operations as of May 2022, but human rights groups believed that the number could be much higher.

Bongbong Marcos to be consulted on ICC drug war probe