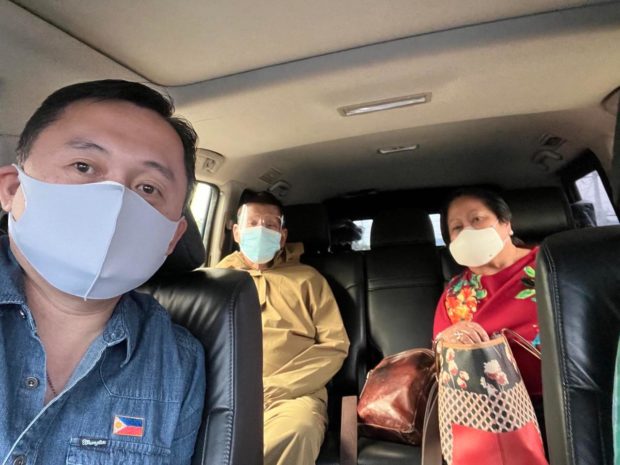 Former President Rodrigo Duterte, with his long-time aide, Senator Christopher “Bong” Go posted a picture of him with the President clad in a tan personal protective equipment (PPE), together with a female doctor. Image from Sen. Bong Go.

According to Go, the former chief executive is still gung-ho to serve the people despite stepping down from office last June 30.

“Ok naman po siya [He is ok]. He is enjoying his retirement, at the same time, bored talaga [he is bored],” Go said in an interview in Pangasinan.

(When your body gets used to working, you will look for ways to work and be of service to the people.)

Duterte, who is staying in his hometown Davao City, is helping individuals who reach out to him, the senator said.

(He loves our fellow Filipinos, and it is in his body and heart to serve and love.)

Apart from missing public service, the 77-year-old Duterte’s health is all right, according to Go.

Earlier, former Executive Secretary Salvador Medialdea said that Duterte plans to teach after his stint as the country’s top leader.

Duterte is known for his administration’s brutal war against drugs and the Build, Build, Build Program.

He ended his term leaving a whopping national debt of P12.79 trillion.