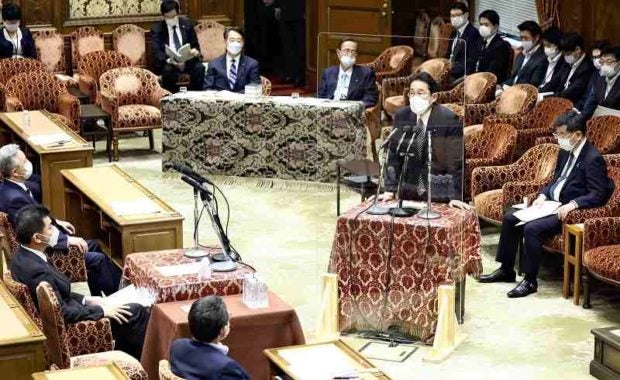 Prime Minister Fumio Kishida speaks about a state funeral for former Prime Minister Shinzo Abe during off-session deliberations at the House of Representatives’ Committee on Rules and Administration on Thursday. The Japan News/Asia News Network

TOKYO — Prime Minister Fumio Kishida sought understanding Thursday in the Diet for the state funeral to be held for former Prime Minister Shinzo Abe, pointing to Abe’s record tenure as prime minister as one of the reasons for the honor.

Kishida made his case during off-session deliberations at the Committee on Rules and Administration of the House of Representatives. It was the first time for the prime minister to explain in the Diet the government’s decision to hold a state funeral for Abe.

The House of Councillors’ Committee on Rules and Administration is also to hold such deliberations later the same day.

At the beginning of the committee session, Kishida cited four reasons for holding a state funeral — Abe was Japan’s longest-serving prime minister at eight years and eight months; he had numerous achievements; many countries expressed condolences; and Japan needs to demonstrate its commitment to democracy, as Abe was killed during an election campaign.

“Given that many countries expressed their respect and condolences for Abe at the state level, holding a state funeral was deemed to be appropriate,” Kishida said.

The prime minister also said that through talks with foreign dignitaries who will visit Japan for the funeral, his government intends to “demonstrate both at home and abroad the will of our nation to carry on and develop the diplomatic legacy that Abe fostered.”

Chief Cabinet Secretary Hirokazu Matsuno called on political parties to cooperate, saying, “We will make the funeral a solemn and heartfelt occasion.”

During the session, members of opposition parties, including Kenta Izumi, the leader of the Constitutional Democratic Party of Japan, asked about the legal basis for the funeral and the validity of the cost estimates. The CDPJ has called for the state funeral to be changed to a “Cabinet funeral,” while urging the government to clarify the relationship between Abe and the Unification Church, which is formally known as the Family Federation for World Peace and Unification.

The government officially decided on July 22, with Cabinet approval, to hold a state funeral for Abe. The event is scheduled to take place at the Nippon Budokan hall in Tokyo on Sept. 27.

In addition to the heads of the judicial, legislative and executive branches of Japan’s government, former Prime Minister Yoshihide Suga will deliver a eulogy as a representative of Abe’s friends.

About 6,000 people, including Imperial family members, lawmakers and foreign dignitaries, are expected to attend. The government estimates the approximate cost, including security and reception expenses, at about ¥1.66 billion.