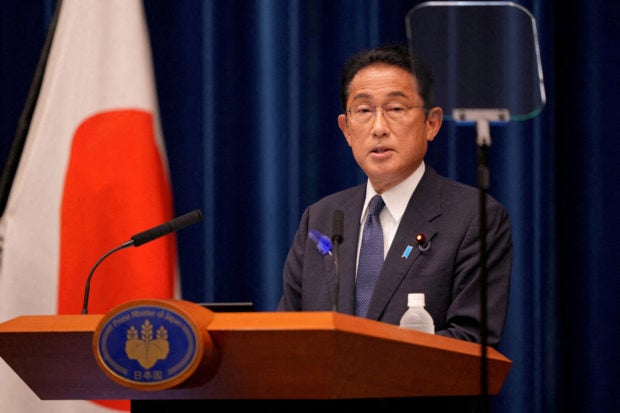 TOKYO — Disapproval of Japanese Prime Minister Fumio Kishida’s cabinet edged above 40% for the first time, propelled by doubts over whether his ruling party would ever be free of ties to the Unification Church, according to a public opinion poll.

Revelations of long-running links to the church founded in South Korea in the 1950s and famous for its mass weddings have become a problem for Kishida since July 8, when former prime minister Shinzo Abe was shot and his suspected killer said his mother was bankrupted by the church and blamed Abe for promoting it.

Kishida’s support has tumbled and ties to the church have also fanned opposition to a state funeral for Abe to be held on Sept 27.

According to a survey by the Yomiuri Shimbun daily, disapproval of Kishida’s cabinet rose to 41% from 34% roughly a month ago, climbing over 40% for the first time since he took office last year, with support holding relatively steady at 50% compared to 51%.

Kishida apologized last week for his ruling Liberal Democratic Party’s ties to the church and said the LDP would make it “party policy” to end such ties and step up compliance.

Though 76% said they approved of this, 72% said they didn’t believe the party would be able to completely sever their ties with the organization, which over the years has faced questions about how it solicits donations.

Opposition to the funeral for Abe, which will be fully paid for by the government, climbed to 56% from 46% a month ago.

The ceremony, to be held at Tokyo’s Nippon Budokan hall, will cost about 250 million yen ($1.8 million), excluding outlays for security and the reception of overseas dignitaries, the government has said.