‘Bloody Sunday’: Raps filed, but are 30 accused cops in jail? 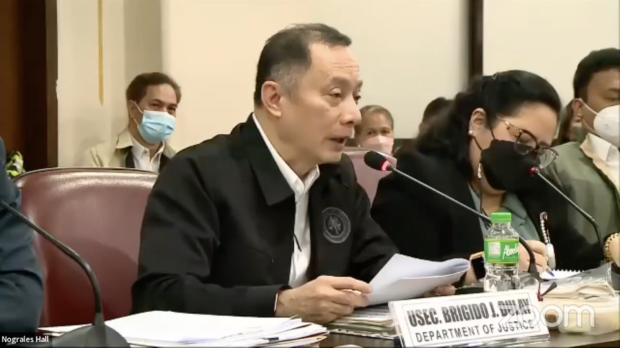 Justice Undersecretary Brigido Dulay at the House hearing on the proposed 2023 budget of the DOJ on Wednesday, Sept. 7, 2022. (Photo from a live stream of the House of Representatives)

MANILA, Philippines – The Department of Justice (DOJ) assured lawmakers on Wednesday that murder complaints had been filed against 30 police officers implicated in the March 2021 “Bloody Sunday” massacre, but it has yet to ascertain the status of the respondents.

Act Teachers Party-list Rep. France Castro raised the issue during the hearing of the House Committee on Appropriations on the proposed 2023 DOJ budget.

Castro asked for an update on the probe of the incident, which is being conducted by the AO 35 Committee, which was created under Administrative Order No. 35, issued in 2012 by then-President Benigno Aquino III.

The inter-agency committee is tasked with investigating extralegal killings, enforced disappearances, torture, and other rights violations.

It was Justice Undersecretary Brigido Dulay who gave Castro an update.

Speaking in a mix of Filipino and English, he said: “As per the report of the AO 35 team, cases of murder have been filed at the Office of the Prosecutor against 30 PNP officers and personnel. So there’s already a case. The preliminary investigation is ongoing. And we commit, Madame Chair, we will submit to the committee the present status of all of those cases.”

Castro asked if the accused officers had been jailed.

Dulay said that they were only under preliminary investigation for the moment. But he neither confirmed nor denied if the officers were in jail.

“This is just observation,” Castro said. “When its uniformed personnel involved, the PI [preliminary investigation] takes a long time. But when it’s trumped-up cases, [suspects] are jailed immediately. So my second question, Mr. Secretary, is: Can you say that we have a healthy justice system?”

It was Justice Secretary Jesus Crispin Remulla who answered, saying that the justice system was healthy despite lacking key resources such as courts, prosecutors, and a sufficient budget.

Remulla mentioned that Manny Asuncion, a union leader and one of the Bloody Sunday victims, was his friend, despite their difference in political views.

“I am one with those who are saddened by that incident. I am not letting it pass. The NBI [National Bureau of Investigation] is investigating it and I am looking to answer those so-called EJKs [extrajudicial killings],” Remulla said.

He added that, if more witnesses could be found, they would be protected, unless they are uniformed personnel.

Castro ended her interpellation by urging the DOJ to reform under Remulla’s watch.

Remulla assured her that the DOH would continue to look into the case.

Cops in ‘Bloody Sunday’ raid want charges against them dismissed