Water recedes in parts of India’s Bengaluru, residents venture out 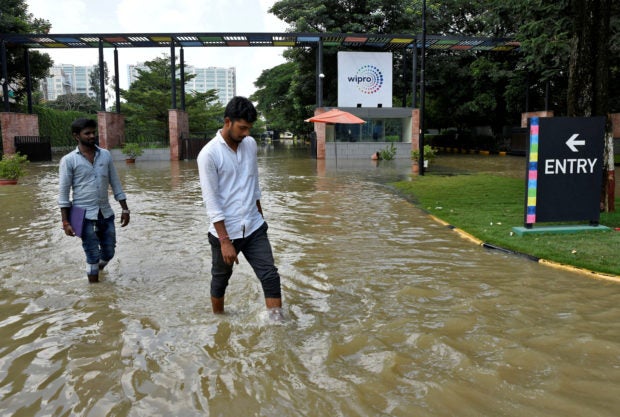 People wade through a waterlogged road in front of the entrance of IT major Wipro Ltd following torrential rains in Bengaluru, India, September 5, 2022. REUTERS/Samuel Rajkumar/File Photo

BENGALURU — Flood waters receded on Wednesday in India’s technology hub of Bengaluru, allowing normal life to resume in parts of the city after two days of incessant rain brought chaos and killed at least one person.

Police said flooded roads had cleared in the worst hit areas with traffic returning to usual levels, while the city’s water utility said it had resumed regular supplies after the flooding closed a pumping station.

“I had to travel to the airport for work and was apprehensive … but the roads had been cleared and it was all good,” said city sales executive Arindam Chowdhury.

India’s “Silicon Valley” is facing an unusually wet monsoon, which has brought 162% more rainfall than average since June 1.

Environmentalists have blamed the flooding on poor urban planning as the fast-growing city has expanded over the years, and on climate change, which has also been blamed for disastrous floods in neighboring Pakistan.

The government of Karnataka state, of which Bengaluru is capital, has announced about 3 billion rupees ($38 million) to help pay for the damage from the flooding in a city in which several global companies and domestic startups are based.

While the worst appears to be over, more rain was expected over Bengaluru through to the end of the week, the weather department said.