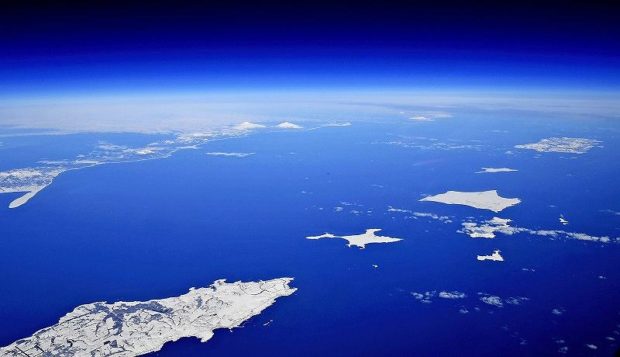 The northern territories as seen from above the Nemuro Peninsula of Hokkaido on January 2019 | FILE PHOTO: The Japan News/Asia News Network

TOKYO — The Russian government on Monday has unilaterally scrapped a series of agreements that sidestepped the delicate diplomatic issue of the northern territories to enable and facilitate visa-free travel between Japan and the four occupied islands, mainly by former islanders.

Japanese citizens and Russians living in the northern territories have been allowed to travel to and from the islands without passports or visas, and former islanders were allowed to visit via a simplified process.

Russia’s latest move is seen as a reaction to Japan’s falling in line with Western countries on sanctions against Russia for its invasion of Ukraine.

The Russian decree unilaterally scraps an October 1991 agreement spelled out in letters exchanged between the foreign ministers of the two countries on visa-free exchanges, as well as a September 1999 verbal note on a framework for open visitation. It also orders the Russian Foreign Ministry to notify its Japanese counterpart of the action.

In March this year, the Russian government retaliated against Japanese sanctions by unilaterally suspending the visa-free exchanges and open visitation program, in addition to halting ongoing peace treaty negotiations with Japan.

According to the Cabinet Office, as of Tuesday, a total of 24,488 people have participated in the visa-free exchanges since its inception, including 14,356 from Japan and 10,132 Russians living in the northern territories. Another 5,231 have participated in the open visitation program. Both programs had been suspended since 2020, mainly due to the pandemic.

Foreign Minister Yoshimasa Hayashi, speaking at a press conference that morning, said, “We filed a strong protest with the Russian side, notifying them of our stance that the decree was extremely unjust.”