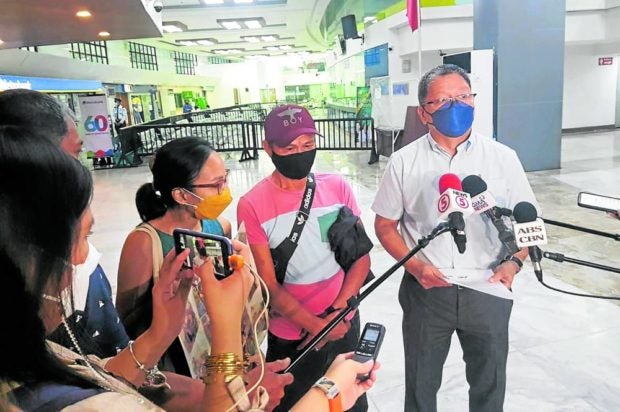 FATHER’S APPEAL | Cesar Veloso (middle) turns up at the Department of Migrant Workers on Friday afternoon to hand over a letter seeking President Marcos’ help in bringing home Mary Jane. Officials acknowledged receiving the letter as Marcos flew to Indonesia for his first state visit on Sunday, Sept. 4, 2022. (Photo courtesy of Migrante International)

JAKARTA — The prospect of bringing home Mary Jane Veloso, a convicted drug mule who was sentenced to death by an Indonesian court in 2010, has remained uncertain even as President Ferdinand Marcos Jr. arrived here on Sunday for a three-day state visit.

Marcos did not mention Veloso’s case when he spoke before members of the Filipino community here, his first official function overseas as head of state since he took office on June 30.

The president also did not say if he would raise the possibility of saving her from death row during his scheduled meeting with Indonesian President Joko Widodo at Bogor Palace on Monday.

Instead, the president praised the overseas Filipinos, most of whom were employed as professionals in Indonesia, for their efforts in protecting the country’s reputation.

“Your good standing in the Indonesian society has contributed to sustaining trade, tourism, and people-to-people links between our countries,” Marcos told a crowd of about 300 Filipinos who gathered at the Fairmont Hotel.

Moments before the president’s arrival, Press Secretary Trixie Cruz Angeles told reporters covering the visit that the Filipino death row convict’s status was not officially on the table of the meeting between the two heads of state.

“We can’t say officially,” Angeles replied when asked if Veloso’s case was included in the bilateral meeting.

“It’s always an issue. Perhaps it will be broached by one or both parties. We will have to see,” she added. “I understand that since it’s a pending issue, it may be inescapable [to discuss it].”

As to whether she would personally provide Marcos a copy of the letter of Veloso’s parents asking Marcos to help save their daughter from death row, she said: “Based on our discussion, [Foreign] Secretary [Enrique] Manalo will take care of this. I am pretty sure he will bring this to the president’s [attention].”

Migrant Workers Secretary Susan Ople said that she had received the letter from Veloso’s parents and was able to discuss Veloso’s case with Manalo before they flew to Indonesia.

“And so by agreement, it will be the [Department of Foreign Affairs] that will be taking the lead primarily [since] it has the institutional memory and knowledge from the start of the case until today and [it’s important] to speak with one voice on a case that has such very sensitive dimensions,” Ople said.

Added Angeles: “I have no doubt in my heart that [Manalo] will do everything possible to discuss this case and also look at other opportunities for collaboration in strengthening migrant workers’ rights.”

“I think the call of the times is for us to be more prudent and circumspect because so much is at stake here,” the Palace official noted.

“There is no compelling reason for [President] Marcos to backtrack from his agenda of bringing up Veloso’s case” when he meets Widodo, the assistant minority leader said in a statement.

She pointed out that the DFA, during last week’s budget hearing, had said that Mr. Marcos would tackle Veloso’s case in his state visit to Indonesia.

The DFA confirmed last week that Veloso’s case was on the agenda of the president’s bilateral meeting with Widodo, but DFA spokesperson Teresita Daza could not say if Marcos would directly ask for a presidential pardon for Veloso.

“I wish to defer in terms of discussing this further, largely because I think we might preempt the discussions that will happen in Indonesia,” Daza told reporters. “But rest assured, as the Secretary (Enrique Manalo) mentioned during the budget hearing, that it is an issue that will be raised.”

Brosas said: “Veloso has been languishing in jail for so long for a crime she didn’t commit.”

Bayan secretary general Renato Reyes said: “If her case is not raised, whether through official channels or informal means, it would appear that her government has abandoned her. That shouldn’t be the case.”

“It is important that the Philippine government take opportunity of the Marcos visit to appeal for clemency for Mary Jane. Bring her home and let justice be achieved,” he said.

Gabriela secretary general Clarice Palce urged Marcos to “exhaust all means to urgently free Veloso, a fellow Filipina whom the Philippine government has repeatedly failed in many regards.”

“It’s high time that Veloso be granted freedom and ensured justice,” she added.

Both Angeles and Ople could not say if the Philippine government, through the DFA, had recently visited the 37-year-old drug trafficking convict to check on her condition.

Last week, Veloso’s parents, Cesar and Celia, told the Inquirer that their daughter phoned them briefly to tell them that they might soon be reunited with Marcos’ help.

Ople, an advocate of migrant workers’ rights, said it was just natural for Veloso’s parents to hope for the best for their daughter.

“As to where they were getting their hopes, that we do not know. It’s the first time I heard that Mary Jane was able to call her parents,” she said.

“So let’s just continue to hope and pray with the family,” she said. “Any talks about Mary Jane will not end with [the president’s] visit.”