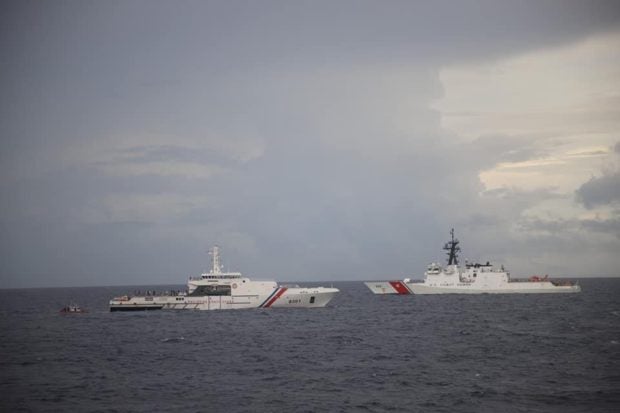 PH and US Coast Guards conduct a joint search and rescue exercise 40 miles off Luzon Point in Mariveles, Bataan on Sept. 2 and 3, 2023. (Photo from the Philippine Coast Guard)

MANILA, Philippines — Two China Coast Guard (CCG) vessels, one of them the biggest in its fleet, were once again spotted near waters where a search and rescue exercise between Filipino and American troops was conducted on Friday and Saturday.

Based on ship tracking data, the ships had been staying outside the country’s territorial seas, but still within the 200-nautical mile (370-kilometer) exclusive economic zone since Wednesday, amid a joint drill between the Philippine and US Coast Guards 40 miles off Luzon Point in Mariveles, Bataan.

Spotted off Mindoro were CCG ships 5901 and 5303 — the former, one of two 12,000-ton Zhaotou-class cutters, the largest in Beijing’s fleet. CCG 5303, on the other hand, was one of the Chinese vessels that harassed local ships bringing supplies to BRP Sierra Madre in Ayungin (Second Thomas) Shoal in April.

But this was not the first time Chinese ships were seen while the country and its traditional ally were conducting military and coast guard exercises.

Earlier this year, the Department of Foreign Affairs summoned the Chinese ambassador to Manila after a People’s Liberation Army Navy Dongdiao-class electronic reconnaissance ship was seen near the site of another military exercise off Palawan, this time between Filipino and American Marines.

CCG vessels have been keeping their constant presence in the West Philippine Sea, in line with Beijing’s excessive maritime and territorial claims.

A local official who spoke on condition of anonymity said the vessels did not disrupt the bilateral exercise aimed at enhancing interoperability.

The Philippine Coast Guard (PCG) did not immediately respond to requests for comment.

The USCGC Midgett arrived in the country on Tuesday, its first international port call for its monthslong Western Pacific deployment, as the United States eyes expanded coast guard presence in the region amid China’s growing assertiveness.

US Ambassador to the Philippines MaryKay Carlson said last week the United States was planning to expand its coast guard engagements in the country “over the months and years to come.”

“US Coast Guard vessels typically visit the Philippines once or twice each year and we also have robust and ongoing cooperation with the Philippine Coast Guard through other numerous initiatives… to strengthen our nation’s maritime partnership,” she said.

China, on the other hand, launched last Friday a training program for “end users of [its] military assistance gratis” as part of efforts to actively support the Presidential Security Group’s capability-building, Marawi rehabilitation, and humanitarian assistance and disaster relief.

In a Facebook post, Chinese Ambassador Huang Xilian said this was “another demonstration of friendship” between the two countries and their military forces.

He also announced the recent launching of a China-Philippines friendship photo exhibit in partnership with the Department of National Defense, to highlight the cooperation between both sides, including military-to-military exchanges.