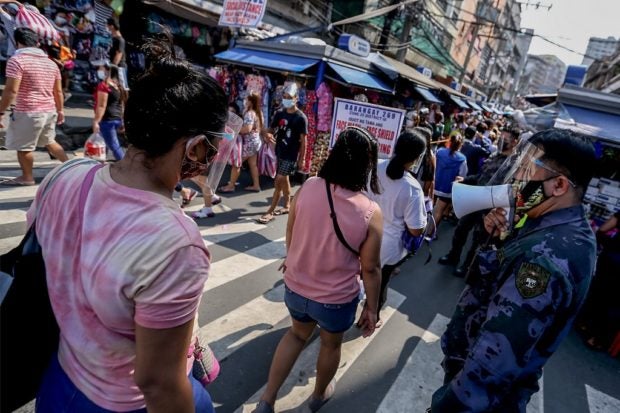 A police officer stands guard as he reminds people to observe COVID-19 health protocol at a popular shopping market hours before Christmas eve in Manila on Dec. 24, 2020. (File photo by Agence France-Presse)

MANILA, Philippines — You better watch out: “noche buena” items may be in for a steep price hike.

But you better not cry: there are still some good ol’ budget-saving tips you can try, according to the Department of Trade and Industry (DTI).

With three months to go before the holidays, the DTI on Saturday said it had already received requests from some food manufacturers for a price increase on traditional fares in the Christmas Eve feast.

“Only on some noche buena products,” Trade Undersecretary Ruth Castelo said in a radio program on dzBB.

In a message later to the Inquirer, Castelo said the requested adjustments so far were on the prices of Christmas ham, mayonnaise and sandwich spread.

On the radio program, Castelo explained that the DTI could only issue a “price guide” for these items and that this type of advisory is different from an SRP, or suggested retail price.

“It’s a guide that we cannot enforce because these products are not prime or basic goods. It’s a seasonal product, which we issue advisories for,” she added.

Better if they can do the grocery shopping early and buy noche buena goods in small amounts well ahead of the Yuletide instead of getting them all at once amid the holiday rush.

She herself, for example, would buy canned fruit cocktail as early as June. Canned goods generally have an expiration date of one year from the time of production, she said.

As part of its usual advisory for the season, the DTI also encourages Christmas shoppers to avail themselves of “bundled” noche buena items to enjoy discounts, Castelo added.

In November last year, the department promoted noche buena items, such as ham, cheese and pasta as they did not increase their prices for the holidays.

The government then also noted that as to other food products the price hike was at a minimal 3 percent.

In August this year, however, basic necessities and prime commodities — or BNPCs in the department lingo — have seen an increase of 3 percent to 10 percent in their SRPs.

Prices of bottled water also increased between 3.53 percent and 10 percent.