Out of sight, out of mind, and no flirting | Inquirer News
Close
menu
search

Out of sight, out of mind, and no flirting 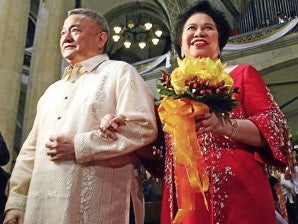 If youth knew, if age could. Sen. Miriam Defensor-Santiago and her husband, lawyer Narciso Santiago Jr., at their 40th wedding anniversary at the Manila Cathedral. INQUIRER PHOTO/Raffy Lerma

She hardly sees her husband, and has never flirted with anyone.

These are just among the secrets why Senator Miriam Defensor-Santiago’s marriage with former Interior Undersecretary Narciso Santiago lasted for 40 years now.

“We never see each other….sometimes I am surprised that I married such a good looking (man) because I hardly can see him. I sort of got surprised when we see each other in the corridor. In other words, we don’t grit down each others’ neck,” she told reporters after their renewal of vows Sunday.

Santiago said her husband was also a “completely free and liberated man.”

“I don’t care where he goes at night. He doesn’t have to call me with his itinerary. I just presume that he is just going to be loyal to his marriage vows,” she said.

“ And I have been extremely faithful to my husband, I never flirted with anybody, even abroad,” said the senator, adding that she has always been very attached to the concept that “marriage is an invariable social institution as our Constitution provides.”

If youth knew, if age could

And so long as she is physically fit, Santiago said she would like another wedding celebration with her husband, though she dismissed the possibility of doing it on their 50th anniversary.

“I don’t think people want to see two septuagenarians riding their wheelchairs down the aisle. So I think that’s a farfetched possibility,” she said.

In fact, Santiago revealed that they would no longer have a honeymoon after their 40th anniversary.

She also finds “disgusting” the thought of kissing her husband in public during their renewal of vows.

“Maybe if I were 20 years younger, or maybe if I am as young as Heart Evangelista, it would be endearing to kiss in public. But to do that at my age would just be disgusting,” she pointed out.